GM will be recovering nearly all of the costs of the Bolt EV recall, as the company got its battery partner to assume nearly full responsibility.GM and LG will continue to make new EV batteries for GM through a joint venture called Ultium LLC.
By : HT Auto Desk
| Updated on: 13 Oct 2021, 09:46 AM 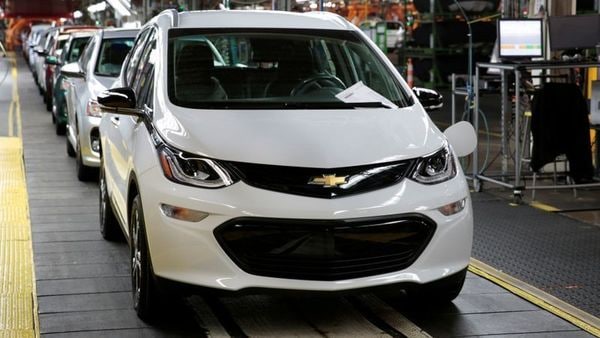 General Motors (GM) has reached an agreement with its South Korean battery partner LG Electronics to recover a cost of $1.9 billion from the latter out of the $2 billion spent in the costs for the recall involving Chevrolet Bolt EVs. The automaker will recognize the recovery in its third-quarter earnings report.

GM had to recall all of its 143,000 Bolt EV models due to a manufacturing defect involving the battery that increased the risk of catching fire, especially during charging. The batteries were supplied by LG Chem, a part of LG Electronics.

GM will be recovering nearly all of the costs of the recall, as the company's Chief Executive Officer Mary Barra got the company’s battery partner to assume nearly full responsibility. After the settlement, both the companies will move past the costly and embarrassing episode that led the automaker to recall the Bolt EVs and ask the owners to restrict its use.

GM had given advisory to the Bolt owners to limit charging of their car’s battery and also asked them to park vehicles outdoors and at least 50 feet (15 meters) from other vehicles.

The automaker had been working with LG to track down and fix the problem in the battery. The companies last month informed that LG plants have resumed battery production and are increasing the capacity so the batteries meant for replacement will begin shipping to dealers as soon as mid-October. The new batteries will include an extended battery warranty of 8-year/100,000-mile.

Even after the whole episode of Bolt EVs and fears of GM and LG's relationship souring, both the companies will partner to make new EV batteries for GM. “LG is a valued and respected supplier to GM, and we are pleased to reach this agreement," said Shilpan Amin, GM’s vice president of global purchasing and supply chain.