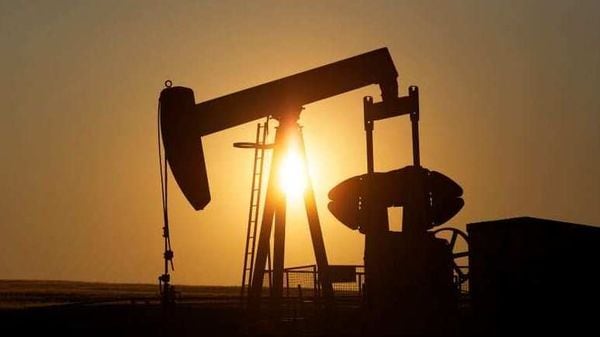 Representational photo of an oil mill.

U.S. gasoline futures jumped to the highest since March and crude oil in New York also rose in sympathy. The storm is expected to make landfall on Thursday along the Texas-Louisiana coast as a Category 3 hurricane, according to the National Hurricane Center. More than 80% of oil output in the Gulf of Mexico has now shut and refiners including Exxon Mobil Corp. and Citgo Petroleum Corp. have reduced operations or closed plants in preparation.

“Products are up much more than crude oil because this is a refinery event," said Michael Hiley, head of over-the-counter energy trading at New York-based LPS Futures. With a significant portion of processing capacity in Laura’s track, “it’s a big deal."

Goldman Sachs Group Inc. estimates that 4 million to 5 million barrels a day of refining capacity is in the Gulf Coast storm’s broader path. Exxon’s Beaumont refinery in Texas and Citgo’s Lake Charles plant in Louisiana are among the latest to join the string of refineries shutting ahead of Laura.

Refinery closures from companies in preparation for the potential hurricane could shut in more than 1 million barrels a day of processing capacity before the storm threat passes.

Still, the hurricane will likely only have a short-term impact on prices with this year’s lackluster summer driving season nearing an end and a pickup in consumption remaining questionable due to the coronavirus pandemic.

(Also Read: India's crude imports fall to lowest in over a decade in July)

As the storms menace fuel supplies in the Gulf Coast, the structure of the U.S. gasoline market has changed. The premium in Nymex gasoline futures for September against October strengthened as much as nearly 40% on Tuesday, a sign that traders expect supplies to be scarcer than previously thought.

There are also signs that crudes outside of the U.S. are rallying in sympathy with American grades, amid the potential for disruption to U.S. crude exports. Key contracts known as swaps in the North Sea market, which prices much of the world’s crude, climbed to their strongest level since mid-July on Tuesday, according to brokerage Eagle Commodities Ltd.