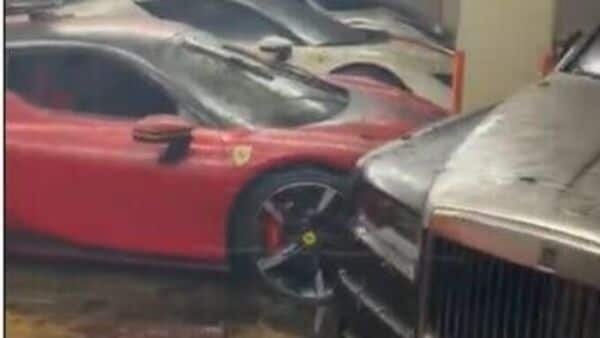 Screengrab taken from the video posted on Instagram by florida_corvette_owners.

Storms struck Florida earlier this month leading to a flood-like situation. Following this, a video surfaced on the internet that showed a garage containing a premium collection of cars. The video was posted on Instagram by @florida_corvette_owners that showed a number of luxury and supercars damaged by flood water.

The video showed that the floodwater is being pumped with the help of a generator pump. It featured vehicles such as a couple of Rolls-Royce Cullinans, a C7 Corvette, many Ferraris and a Mercedes-AMG GT. One model appeared to be a Plymouth Prowler. Currently, the damage to the luxury vehicles is unknown though all the dirt and grime around the garage shows that the flooding was indeed serious. One can make out from the video that the Mercedes-AMG GT appeared to be sitting on top of a concrete divider.

The video received many comments expressing shock. One commenter said that after watching this, he almost cried. Another commenter said if the owner throws out any of the Ferraris, the person would like to take one. Florida faced a severe storm followed by heavy rain and reportedly the storm will be called Tropical Storm Alex. The speed of the wind went up to 64 kmph.

Rolls-Royce Cullinan is an all-terrain SUV from the ultra-premium luxury automaker. The brand claims it to be the most capable Rolls-Royce model ever. It features a new chassis technology and self-levelling air suspension that cushions the user against tough surfaces. It comes with an opulent interior. It also comes with a Champagne cooler or whiskey decanter in the centre console of the car. The price of Rolls-Royce Cullinan starts from ₹6.95 crore.

Mercedes-AMG GT is a two-seater model and has two variants, Mercedes-AMG GT R and the GT Roadster. The former is powered by a 4.0-litre twin-turbo V8 petrol engine that generates a power of 585 PS of power and 700 Nm of torque. Its price starts from ₹2.71 crore.