Venezuela's fuel shortage has deepened since Iran sent five tankers laden with fuel in May and June to the country, causing US officials to issue warnings to Tehran.
By : Bloomberg
| Updated on: 08 Aug 2020, 10:15 AM 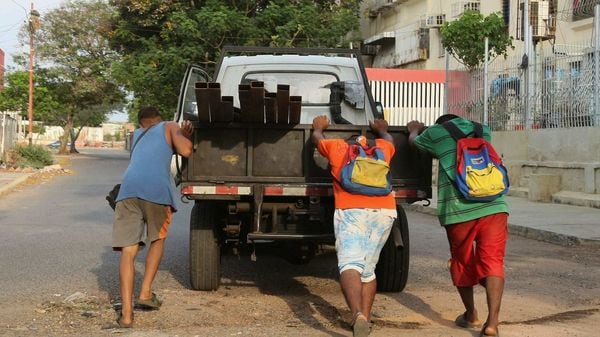 Men push a truck that run out of fuel as Venezuelans are struggling to cope with chronic fuel shortage, in Maracaibo, Venezuela.

Venezuela is once again shuttering gas stations across the country as the chronic shortage of fuel deepens due to ailing refineries and crippling sanctions limiting imports into the country.

State oil company Petroleos de Venezuela SA is rationing fuel nationwide, according to a person familiar with the matter, who asked not to be identified because the information isn’t public. The move is partially a result of two of the country’s biggest refineries suffering serious breakdowns in recent weeks amid sweeping US government sanctions banning the sale of gasoline to the country.

The shortage has deepened since Iran sent sent five tankers laden with fuel in May and June to Venezuela, causing US officials to issue warnings to Tehran. No more shipments have been received since. Iran also sent technicians to help improve the reliability of the country’s refineries to little avail.

Venezuela is back to where it was in March, when residents in Caracas -- usually the last to experience fuel shortages -- lined up for days or paid as much as 4 dollars per liter to fill up their cars in the black market. Some 950 out of 1,570 gas stations have been closed or are operating on a very limited schedule, according to a person with knowledge of the situation, who also asked not to be identified because the information isn’t public.

The lines are forming despite a nearly five-month long quarantine that has severely limited transportation nationwide.

Public transportation has almost disappeared and workers walk even dozens of kilometers to get to their jobs. The situation also presents a logistical crisis, with 90% of commercial goods reliant on road transportation to move around the country.

(Also read: Amid fuel shortage, this country turns to bicycles in boom for repair shops)

“Our freight cargo services have slowed down due to lower supply of diesel at fuel stations in five states," said Jonathan Durvelle, head of the cargo transportation chamber in Puerto Cabello, Venezuela’s biggest port. Some 3,000 affiliated cargo trucks now queue for 12 hours, affecting timely delivery of goods and raising costs.

Manolo Ferraz, a farmer from Bailadores in the Andean region of the country, is running at a loss.

“I’ve thrown cabbage, pepper, carrot crops away because of the lack of gasoline to move them to distribution centers," Ferraz said. “I’ve had to sell milking cows to slaughterhouses."

The region produces 85% of vegetables in the country, according to farming federation Fedeagro.

Three years ago, three to four trucks per day used to haul produce to distribution areas in the center of the country from 480 kilometers (300 miles) away. Now, only two or three come per week, according to Ferraz.