From Honda to Kawasaki: Two-wheeler companies turning a serious eye on EVs

Kawasaki has patented several battery-powered as well as hybrid projects in the past.Honda has announced that it will introduce three electric two-wheelers in the global market by 2024. Suzuki is readying an electric variant of Burgman scooter for India.
By : Prashant Singh
| Updated on: 15 Oct 2021, 01:45 PM 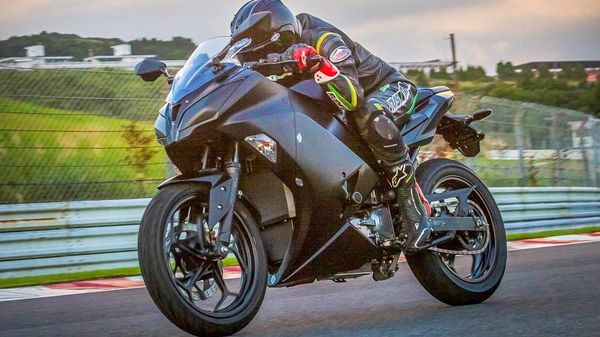 Kawasaki has patented several battery-powered as well as hybrid projects in the past.

Electric vehicles sales in India are rocketing to new heights and that's majorly because of the range of new options available in the market, alongside various subsidies offered by the government to encourage new buyers to opt for battery-powered vehicles.

While Ather Energy, the Bengaluru-based EV startup has been successful in making an early entry into the segment, relatively newer entrants including Ola Electric have also made a major impact in the Indian electric two-wheeler market.

As far as the current options from the mainstream two-wheeler companies are concerned, only TVS and Bajaj Auto have been active in this space but with limited options. Maybe what's happening at this moment is that major bike companies are laying low to analyse the outlook of the EV industry in the next five years.

But things are now taking a turn for good and there's a bright chance that every major two-wheeler maker would have already launched an electric two-wheeler in the market in the next five years from now. Facts supporting this standpoint are the recent developments that hint towards the growing seriousness of major two-wheeler companies towards the EV business.

For starters, Kawasaki recently rolled out the news that it will turn purely green in select markets by 2035. Majority of which will be developed markets that will have sufficient infra to support battery-powered technology in the immediate future. Needless to say, if Kawasaki manages to develop EV alternatives to its bikes by 2035, some can also be transported to developing markets (including India).

Apart from Kawasaki, even Honda looks up to the electric future as it has informed of the introduction of at least three electric vehicles in the global market by 2024. These two-wheelers will be featuring Honda Mobile Power Pack (MPP), which is essentially a swappable battery pack that stores electricity. As far as the Indian market goes, Honda 2-Wheelers India may also introduce an EV in the market within the next few years to rival the likes of Ola Electric and Ather Energy.

That said, Suzuki has also been caught testing the electric variant of the Burgman scooter numerous times in the past. The same will be launched in India within the next few months. Also, not to forget that even Hero MotoCorp, India's largest two-wheeler brand, is readying an electric scooter that will go on sale in India by 2022.

With so many bike companies jumping in the pool, the EV market is bound to heat up in the next few years.