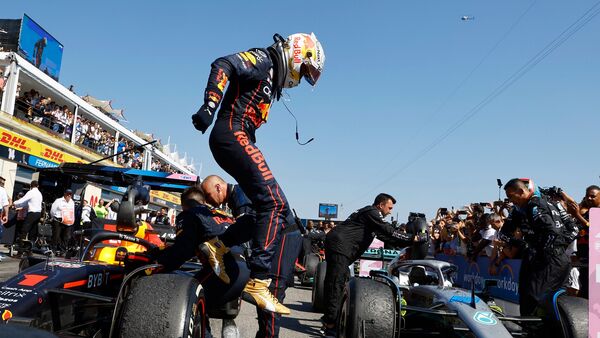 Red Bull's Max Verstappen extended his lead over others on driver board this season as he finished on top at the French Grand Prix on Sunday. Verstappen is inching closer to secure his second straight championship title after he edged out Lewis Hamilton last year in a nail-biting finish. Hamilton returned to podium at the Paul Ricard racetrack and created a new record in Formula 1, while his teammate George Russell finished third.

Verstappen's victory in France was helped a bit by a French. Charles Leclerc, Ferrari's ace driver this season, crashed out of the race during the 18th lap. Despite starting at pole position and leading the race until then, Leclerc made the costly mistake on lap 18. His car spun out of control at the 11th corner and crashed into the tyre barrier.

Leclerc was heard screaming in anger and frustration over the radio just before the crash. He escaped unhurt, but blamed himself for the unforced error. "I've been saying I think I'm performing at my highest level in my career but if I keep doing those mistakes then it's pointless to perform at a very high level," he told Sky Sports television. "I'm losing too many points," said Leclerc at the end of the race.

This was Verstappen's seventh win in 12 races so far in this year's Formula 1 championship. Verstappen now sits comfortable with a 63 point lead over Leclerc on the driver board with 10 more races to go this season.