A rainbow-coloured crosswalk installed in West Vancouver was left defaced with black tyre marks after a Ford Mustang drove over it.
By : HT Auto Desk
| Updated on: 11 Jul 2020, 04:38 PM 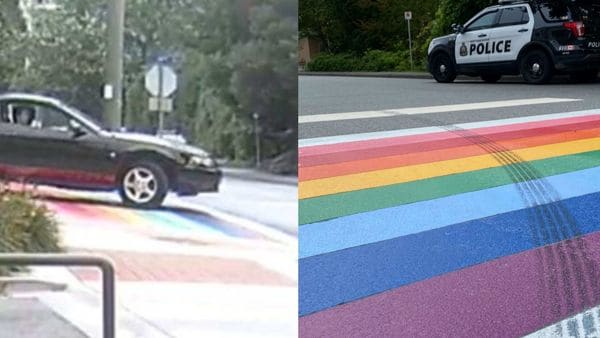 A Ford Mustang driver has been held responsible for defacing a recently installed Pride crosswalk in West Vancouver, Canada. The incident recorded in a surveillance video showed the Mustang pulling up to the intersection of the crosswalk and then stopping for a bit before driving away.

The West Vancouver Police Department posted pictures on Twitter of the pony car seen in the video and the defaced Pride crosswalk with tyre marks all over it. The police described the car as a 1999-2004 black Ford Mustang with red racing stripes along the top and sides, a rear spoiler and hood scoop. It also requested people with information about the car to report on a provided number.

Investigators would like to speak with the driver responsible for defacing a recently installed Pride crosswalk at 16th St. and Esquimalt Ave. If you have information, please call 604-925-7300. https://t.co/ywkNR4DMAv pic.twitter.com/ViW0ZxcxYN

Black tyre marks on the crosswalk were discovered when the staff inside the police station came rushing out on hearing a loud and sustained tire squealing sound outside, a release by the police department said. However, they couldn't locate the vehicle then as the suspect left the area at a high rate of speed.

The driver of the Mustang has now been identified by the police but there has been no word on whether the person would face any charges. The authorities had earlier said that they were investigating a case of 'mischief to property'. The Pride crosswalk was unveiled by the Vancouver Police on the occasion of the LGBT Pride Month. An official commenting on the defaced crosswalk said, "This is very upsetting."

Maybe don’t paint stuff on streets if you don’t want cars driving over it? 🙄🤷🏼‍♀️

But it seems that Twitterati did not relate to the police official. Some replied to the police department's tweet saying, "Maybe don’t paint stuff on streets if you don’t want cars driving over it?" and "If you want to keep something pretty and clean, don’t put it where cars are going to drive over it."