Showing off is not always a good idea. This Ford Mustang driver realised it the hard way.
By : Sabyasachi Dasgupta
| Updated on: 04 Jul 2020, 09:12 AM 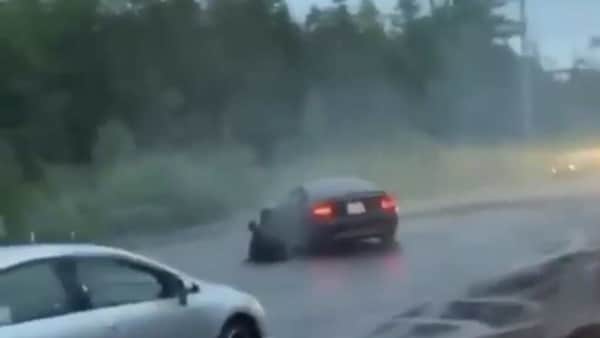 The driver was flung off the vehicle while performing a donut stunt. (Photo courtesy: reddit.com/IdiotsInCars)

For a change, this story starts with a disclaimer: Do not attempt to perform such stunts if you have no expertise. And if you own a Ford Mustang, beware. Because it has a history of crashing more regularly than most other pony cars.

Here is one of many examples. In a video shared online, that has now gone viral, a person was seen trying to show off his skills on a fourth generation Ford Mustang in front of a small crowd. By the looks of it, the track was quite wet, and was suitable for experts to perform donuts and drifts. These stunts are perfect if one wishes to show off skills behind the wheels.

But the person driving the Ford Mustang figured out the hard way that showing off is not a good idea always. The man is seen trying to perform a donut stunt. He appeared to have completed one round of donut successfully. When he starts his second attempt, the car skidded a bit more than he intended on the slushy surface.

The person behind the wheel clearly did not take the usual precautions of locking the door or wear seat belts. As a result, the door of the Ford Mustang was thrown open and he fell. It all appeared as if the Ford Mustang just flung its driver off in disgust.

What happened next was more intriguing. After ‘dropping off’ its driver, the Ford Mustang kept rolling on, until it jumped off an embankment on the side of the road. While the video does not show how the Mustang’s solo trip ended, but it may not be too hard to imagine a few dents and scratches at least.

The driver seemed to have escaped without much harm and managed to stay clear of the rear wheels of the Ford Mustang. He was seen running behind his pony car to save it from a 'suicidal' sojourn, but he ended up watching it roll off the side of the road quite helplessly.

The moral of the whole incident is that it's always safe to secure yourself behind a seat belt while driving and ensure the doors are locked when on the move. Also, showing off may not be such a good idea if you are not in control.