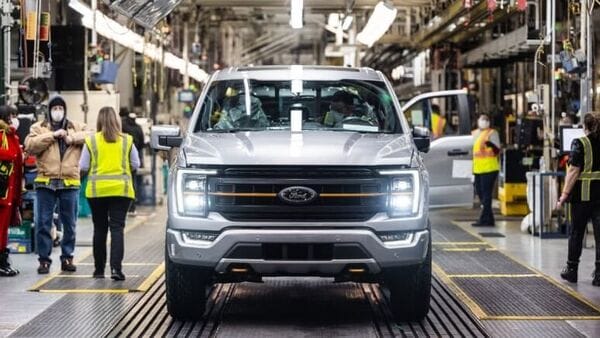 Sales of Ford Motor's F-Series pickup models declined by 31% in the first-quarter of the year as the company continued to struggle with the semiconductor shortage. The automaker sold 159,328 units in the US in March across its own and Lincoln brands, which was a 26% decline from a year ago while the sales declined 17% for the full quarter.

The performance is a particular blow to Ford as it prepares to roll out an electric version of its F-150, which has nearly received 200,000 non-binding reservations from potential buyers. The F-Series line is the top-selling vehicle in the US and Ford’s most profitable product.

The company said it has a high number of F-Series trucks in transit to dealers. "While the global semiconductor chip shortage continues to create challenges, we saw improvement in March sales, as in-transit inventory improved 74% over February," Andrew Frick, vice president of sales, distribution and trucks, said in a statement.

In starting the year with a bumpy sales ride,Ford joined its automaker peers who also reported a decline in sales as the war in Ukraine and volatile fuel prices added to supply-chain challenges being faced by time along with the upheaval caused by the pandemic. Toyota Motor, however, managed to retain its spot as the No. 1 automobile seller in the US for the first quarter, despite a 15% decline in sales.

Following Ford's first quarter and March sales data, CFRA Research lowered its earnings estimate for Ford and cut its 12-month price target by $5 to $25. However, the firm said that Ford’s move to transition to electric vehicles gives its stock “expansion potential" as it becomes valued less like a legacy auto manufacturer. “Clearly, chip shortages are hurting Ford’s volumes, but we believe there is reason for optimism," Garrett Nelson, vice president at CFRA Research, wrote in a note to investors.