Harley-Davidson's LiveWire electric motorcycles are being used at the COP26 climate summit for patrolling purposes as well as escort VIPs at the venue.Earlier, it has been mentioned that Jaguar Land Rover will also provide a fleet of electric vehicles for the summit.
By : HT Auto Desk
| Updated on: 02 Nov 2021, 04:04 PM 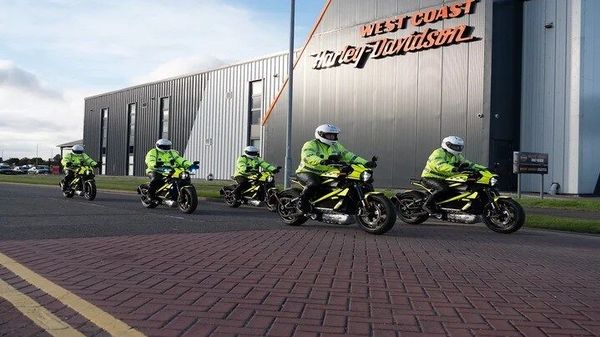 The fleet of Harley-Davidson's LiveWire electric motorcycles that will be used in the COP26 climate summit.

The much-anticipated COP26 climate summit has begun and delegates from around 200 countries are meeting at Glasgow to discuss urgent actions to reduce fossil fuel emissions to save the planet from a climate catastrophe. To spread the message loud and clear about carbon emissions, the UK police have opted for Harley-Davidson's LiveWire electric motorcycles for the purpose of patrolling the summit.

Harley-Davidson LiveWire comes with a 78 kW electric motor and the electric motorcycle has a top speed of 177 kmph. The EV can sprint to the speed of 100 kmph from zero in 3 to 3.1 seconds.

It has also been reported earlier that Jaguar Land Rover would provide a fleet of electric vehicles to escort the world leaders participating in the summit. The fleet will also constitute the all-electric performance SUV - Jaguar I-Pace.

Jaguar Land Rover which is aiming to attain its zero-carbon goals by 2039 had stated that the company is delighted to collaborate with COP26 and provide a fleet of all-electric vehicles, including Jaguar I-Pace performance SUVs, to deliver zero-emission transport at the summit.