Elon Musk vs Jeff Bezos: Rivalry brews at ground level. And in space

Elon Musk is considered the maverick but it is Jeff Bezos who still tops the most-recently updated list of the richest.Bezos is ahead of Bill Gates, Mark Zuckerberg and Mukesh Ambani.
By : HT Auto Desk
| Updated on: 11 Aug 2020, 08:36 AM 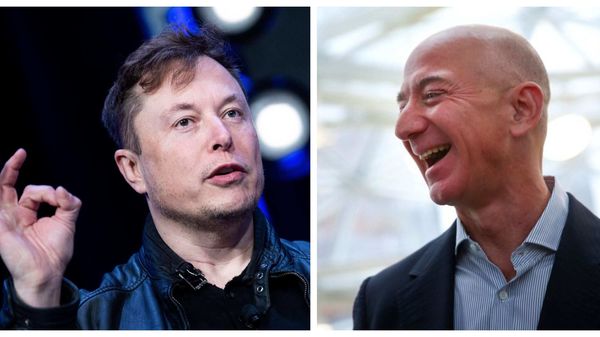 Amazon does not have an interest or role to play in mobility solutions. Yet. And not directly anyway. Similarly, Tesla's tryst with e-commerce is largely restricted to selling its own merchandise on its own website. And while the main business focus areas for both Jeff Bezos and Elon Musk may be widely different, the two maverick tycoons have been found competing quite directly in recent times - whether it is in areas of space exploration or in the list of the world's richest.

Musk may be significantly behind Bezos in the list of the world's richest but he has been taking some big strides courtesy the success of Tesla electric vehicles and the forays made by his aerospace manufacturing and space transportation services' company SpaceX. SpaceX recently managed to bag a US Air Force contract to make rockets in a duel which also featured Bezos' Blue Origin. The US Air Force is looking at replacing Russian rocket technology amid rising geopolitical tensions and it provides an opportunity to both SpaceX and Blue Origin to cash in.

The ever-rising fortunes of Bezos and the rapidly increasing wealth of Musk have often been cited as success stories in management classes. And yet, many point out how different the two individuals are and how different their style of doing business is. Musk is unconventional, rather eccentric even but his success with Tesla has made established car makers with decades of heritage sit up, take note and even adapt. Bezos on the other hand is regarded as the more commanding tycoon who goes lock, stock and barrell.

Have their been direct confrontations? Why, of course.

Bezos' Amazon recently acquired a company called Zoox which deals in self-driving cars. This immediately prompted Musk to describe Bezos as a 'copycat.' He has also taken potshots at Blue Origin and Amazon, saying 'it is time to break the monopoly.'

Musk may have a cult following but it is Bezos who still has the big bucks. The most-recently updated list of the richest has him on the very top, followed by Bill Gates, Mark Zuckerberg and Mukesh Ambani.