Musk revealed the information while replying to a tweet showing a render of the Cybertruck pulling a full camper style fifth wheel home.The Tesla Cybertruck is slated to go into production later this year.Tesla CEO has also asked his followers on Twitter about their expectations from the Cybertruck.
By : HT Auto Desk
| Updated on: 12 Mar 2021, 12:20 PM 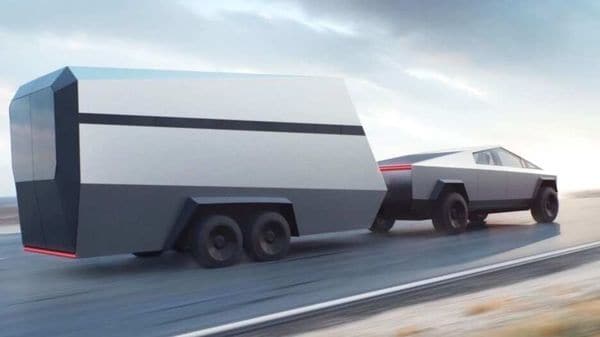 The Tesla Cybertruck is slated to go into production later this year.

First revealed in late 2019, the Tesla Cybertruck is all-set to go into production later this year. Now, Tesla CEO Elon Musk has confirmed in one of his tweets that the Cybertruck will be capable of powering motor homes. Musk revealed the information while replying to a tweet showing a render of the Cybertruck pulling what looked like a full camper-style home.

The feature of powering a camper with an electric pickup truck does sound intimidating, to say the least. This also hints that the Cybertruck is expected to get some bidirectional charging capacity on top of the power outlets at the rear.

Musk has also said in the past that Tesla is planning a “sick attachment for the Cybertruck," and the company also released a render showcasing the electric pickup truck with a trailer, albeit it didn't appear to be a traditional camper. If it gets a large enough solar panel system over the top, the Tesla camper could also enable customers to off-grid camping with Cybertruck.

Irrespective of what Tesla plans for the Cybertuck (whether it gets a camper configuration or not), what's certain is that the Cybertruck is likely to be used by some customers with aftermarket, third-party campers. Like the way Model 3 spurred several aftermarket companies, looks like the Cybertruck has the same potential.

Musk has also asked his followers on Twitter about their expectations from the Cybertruck attracting tons of comments which include a 240v outlet for charging another EV or run heavy-duty power tools.