The drive-in concept for Durga puja would allow people to slow down their cars to take a look at a pandal and Durga idol without having to alight from the vehicles.
By : PTI
| Updated on: 09 Aug 2020, 13:30 PM 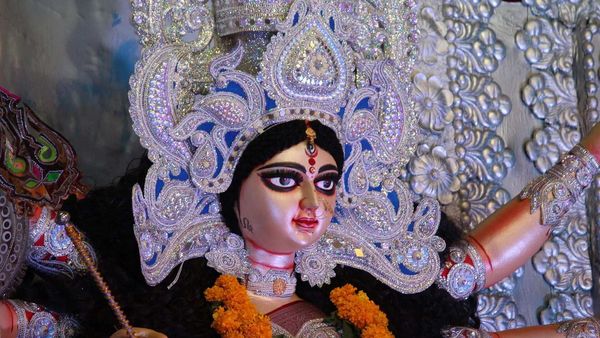 Photo of a Durga idol used for representational purpose

With little more than two months to go for Durga puja, festival committees in the city are brainstorming ways to ensure the safety of pandal-hoppers amid the Covid-19 crisis, while offering them a glimpse of the goddess.

Three Durga puja committees in the city, all crowd- pullers and located within one-km stretch in south Kolkata, have joined hands to introduce a drive-in 'darshan' concept - an arrangement which would allow people to slow down their car to take a look at the pandal and the Durga idol without having to alight from their cars.

"As maintaining physical distance is mandatory, we had to think of a concept that would avoid crowding near the pandals. Our patron, Texas-based Mridul Pathak, came up with this drive-in concept during a video conference. Shortly after, we set the ball rolling," Kapil Dev Pathak, an officer-bearer of Badamtala pujo committee, said.

Sanitiser will be sprayed on the cars before every puja pandal, he said.

"The drive-in route has been mapped in a certain way... Revellers will get to catch a glimpse of the Badamtala puja decoration, before proceeding westwards to 66 Pally, and finally the Nepal Bhattacharya Street Durga Puja at the end of the trail," Pathak explained.

The organisers have decided to pay tribute to auteur Satyajit Ray this time, he said.

"As this year marks Ray's birth centenary, we chose Apu trilogy as the theme for the three marquees. Badamtala will portray scenes of 'Pather Panchali', 66 Pally of 'Aparajito' and Nepal Bhattachaya Street Pujo will depict 'Apur Sansar'," he added.