Delhi transport department will deploy teams to essentially check PUC Certificates of vehicles at fuel stations across the state.The agenda behind the massive enforcement drive is not to fine motorists rather encourage them to get PUC certificates.
By : HT Auto Desk
| Updated on: 17 Oct 2021, 03:59 PM 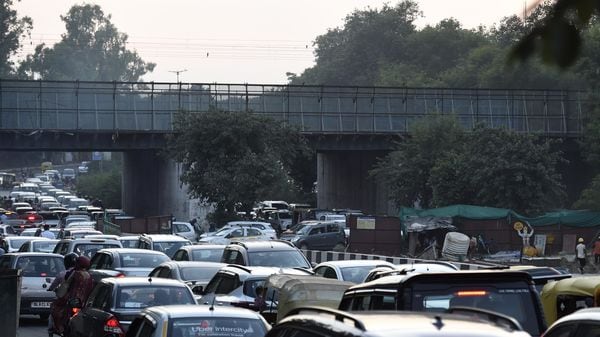 File photo vehicles at a stretch of road near Pragati Maidan in Delhi used for representational purpose only.

The Delhi Transport department has launched a massive enforcement drive against those vehicles which do not have a valid Pollution Under Control (PUC) certificate, as per a notice issued by the Pollution Control Division of the department. This action is being taken ahead of the onset of winter season when the city witnesses rising pollution levels.

These teams will essentially check PUC Certificates of vehicles and ask motorists to get one if they do not have it already. The agenda behind the massive enforcement drive this time is not to fine motorists rather encourage them to get PUC certificates. “The focus will be on encouraging vehicle owners not having a PUCC to get it rather than penalising them. However, those declining to do so or trying to speed away may be challaned," a senior transport officer said, PTI reported.

Earlier this month, Delhi CM Arvind Kejriwal had announced a 10-point winter action plan that included strict enforcement of PUC certificate with the formation of 500 teams to check the vehicles.

Under the Section 190(2) of the Motor Vehicle Act, 1993, vehicle owners who do not have a valid PUC are liable to be fined up to ₹10,000, or be imprisoned for up to six months or both. They are expected get their vehicles tested periodically for emission standards for pollutants such as carbon monoxide, carbon dioxide, after which they are issued the PUC certificates.

There are around 1,000 pollution checking centres in the state authorised by the state transport department. These have been set up at petrol pumps and workshops across the city. The fees for pollution checking of petrol and CNG-driven two- and three-wheelers is ₹60 while that for petrol four-wheelers is ₹80. The price for diesel vehicles is ₹100.