The most important benefit of Hydrogen-CNG fuel is that it emits 70% less carbon monoxide, reduces total hydrocarbons emissions by around 15% and increases fuel efficiency by 3-4%.
By : PTI
| Updated on: 22 Oct 2020, 10:08 AM 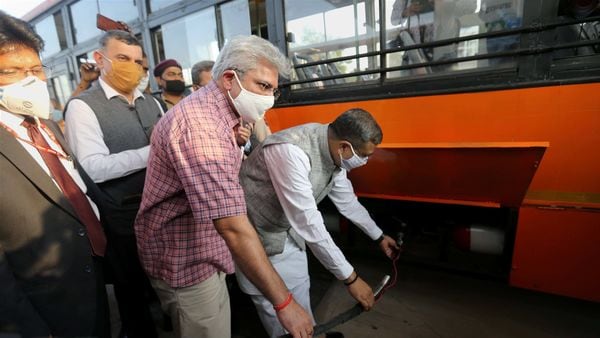 With the inauguration of a Hydrogen-enriched Compressed Natural Gas (HCNG) plant and dispensing station at the Rajghat depot in Delhi, the six-month trial of the clean fuel in a fleet of 50 cluster buses have begun.

"We are starting the six-month trial of HCNG fuel in 50 BS 4 compliant buses of Rajghat depot. Delhi, as the country's capital is taking a lead in promoting environment conscious transport policies by adopting cleaner fuels like HCNG and electric vehicles," Gahlot said.

The most important benefit of HCNG fuel is that it emits 70 per cent less carbon monoxide, reduces total hydrocarbons emissions by around 15 per cent and increases fuel efficiency by 3-4 per cent, he said.

"I am assured that once the trial is successfully completed, use of HCNG can be scaled up to other buses and private vehicles in Delhi," he said.

The HCNG production plant at Rajghat has the capacity of producing four tonne of the fuel per day. It has been set-up by IOCL in collaboration with the transport department of Delhi, said the statement.

The Delhi transport department has provided a fund of ₹15 crore for the setting up of the plant and conducting the study on the fuel, it said.

Fifty cluster buses have been earmarked by the transport department for holding demonstration trials for a period of 6 months.

The Ministry of Road Transport and Highways (MoRTH) has also notified HCNG as a fuel starting September, 2020.

HCNG is predicted to be the first step to a Hydrogen Economy and can be used in place of gasoline, diesel, LPG. Its combustion produces fewer undesirable gases in comparison to a normal automobile fuel, the department said.

The switch over to HCNG fuel from conventional ones requires minimum modifications to the existing buses, it added.