The move to stop production came amid growing signs a U.S. recession is imminent, and shares of automakers plunged as part of a broader market sell-off.GM dropped 17%, Ford declined 10%, Fiat Chrysler fell 9% and Tesla sank 16%.
By : Bloomberg
| Updated on: 19 Mar 2020, 08:39 AM 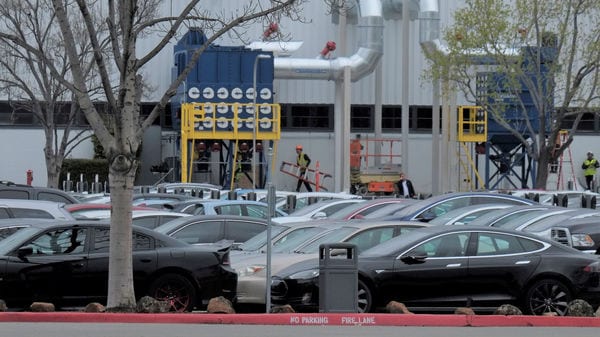 Workers at Tesla Inc's factory in Fremont, California scaled ladders to work on equipment outside the building.

General Motors Co., Ford Motor Co., and Fiat Chrysler Automobiles NV will temporarily shut down their U.S. plants in an effort to contain the spread of the coronavirus, bowing to public pressure that Tesla Inc.’s Elon Musk has defied.

Ford will halt operations at all North American manufacturing facilities after Thursday evening shifts, according to a statement. GM said it will suspend production at all plants -- at different times and on a rolling basis -- until at least March 30 and Fiat Chrysler also plans to idle its factories through the end of the month.

“We have agreed to a systematic, orderly suspension of production to aid in fighting Covid-19," GM Chief Executive Officer Mary Barra said in a statement. “We have been taking extraordinary precautions around the world to keep our plant environments safe and recent developments in North America make it clear this is the right thing to do now."

The moves around Detroit stood in stark contrast with Tesla, whose sole U.S. auto plant in Fremont, California, has remained operational despite one of the most stringent shelter-in-place orders in the nation. After the local sheriff tweeted the company is not an essential business, a spokesman for the county said the company was preparing to reduce staffing at the facility by 75%.

The county’s order urges all residents to stay at home and doesn’t list auto manufacturing among exempted businesses. In an email to employees early Wednesday, Tesla said production would continue as it awaited final word on the plant’s status.

Representatives from Tesla didn’t reply to requests for comment.

Tesla’s CEO Musk has said he believes widespread concern about the coronavirus was overblown. “My frank opinion remains that the harm from the coronavirus panic far exceeds that of the virus itself," he wrote in an email to staff on Monday.

Detroit’s plant closures come as American industry begins to grapple with which operations are necessary to continue basic functioning of the economy and which should be shuttered to safeguard human lives. Consumer companies are pushing for an exemption from a federal ban on gatherings to replenish products that are rapidly disappearing from store shelves.

The move to stop production came amid growing signs a U.S. recession is imminent, and shares of automakers plunged as part of a broader market sell-off. GM dropped 17%, Ford declined 10%, Fiat Chrysler fell 9% and Tesla sank 16%.

GM, Ford and Fiat Chrysler have been in tense negotiations with the United Auto Workers to find ways to avoid shutting their plants. The companies had asked Sunday for a two-day window to sanitize plants to keep them running safely after rejecting a request by union leaders to idle factories for two weeks.

Late Tuesday, the three companies said that they would partially shut down facilities on a rotating basis to protect UAW members from the spread of Covid-19. But by Wednesday morning, Honda Motor Co. -- which does not employ unionized workers -- announced its plan to suspend North American production for six days.

Toyota Motor Corp. and Hyundai Motor Co. also announced plant closures, with the Japanese carmaker shutting down all North American auto part and vehicle assembly operations for two days from March 23 and its Korean rival shuttering its Alabama plant indefinitely Wednesday after confirming a case of Covid-19 among its workforce. Nissan Motor Co. also followed, with output suspended from March 20 through April 6.

Anxiety has been building among auto workers who are concerned they could contract the coronavirus if they continue to report for work. Staffers briefly refused to work at a Fiat Chrysler minivan plant last week and in the paint shop of a truck factory Monday out of fear of getting sick.

Ford also closed its Ranger pickup plant in Wayne, Michigan, Wednesday morning after a worker tested posted for Covid-19. That plant will be disinfected and will remain closed through March 30, the company said.

Car manufacturing has virtually ground to a halt in Europe this week after the coronavirus earlier disrupted output in countries including China, South Korea and Japan. Shutdowns by the likes of Volkswagen AG, Daimler AG and Renault SA span the continent, with several companies choosing to idle production until further notice rather than publicly announce plans for when assembly lines will roll again.

U.S. auto factories had largely been spared shutdowns related to the global pandemic, though Volkswagen announced the idling of its assembly plant in Chattanooga, Tennessee, on Monday.

John Bozzella, president of the Alliance for Automotive Innovation, an industry trade group, said carmakers haven’t asked for sector-specific relief from the government, but support the economic stimulus measures being developed by U.S. President Donald Trump’s administration and Congress.

“What we are focused on right now and are very supportive of are broad economic measures that keep the economy on track as we continue to grapple with a very, very rapidly evolving situation," Bozzella said.