The social-distancing wearable could be part of a broader array of new safety protocols Ford deploys as it resumes production as early as next month after at least a roughly six-week shutdown.
By : Bloomberg
| Updated on: 16 Apr 2020, 09:12 AM 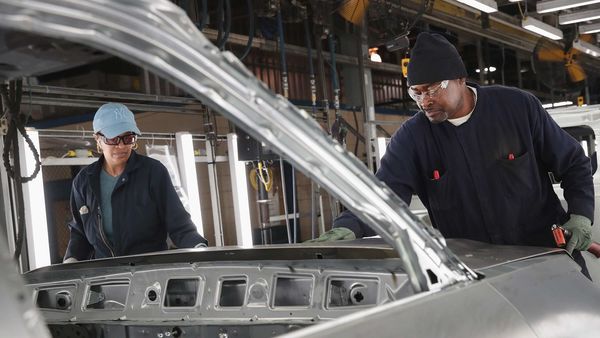 A dozen Ford Motor Co. workers are experimenting with wearable social-distancing devices that could be deployed more widely once the carmaker reopens idled manufacturing plants.

The small group of volunteers at a Ford factory in Plymouth, Michigan, are trying out wristbands that vibrate when employees come within six feet of each another, said Kelli Felker, a company spokeswoman. The aim is to keep workers from breaching the distance that health experts recommend to avoid spreading the coronavirus.

The social-distancing wearable could be part of a broader array of new safety protocols Ford deploys as it resumes production as early as next month after at least a roughly six-week shutdown. The automaker is also expected to subject all workers entering a facility to a thermal-imaging scan to detect a fever. And it will provide staff with masks and, in some cases, plastic face shields, Felker said. The company is devising the measures along with the United Auto Workers union.

“Ford and the UAW are working closely to identify different ways to keep our people safe while they are at work," Felker said.

Ford has been piloting the new safety procedures at factories where it’s now producing ventilators and respirators to supply hospitals fighting the Covid-19 pandemic. Those practices -- which include requiring workers to complete a daily online survey on their health and those they’re in contact with -- are expected to be rolled out to the company’s traditional auto factories as they reopen.