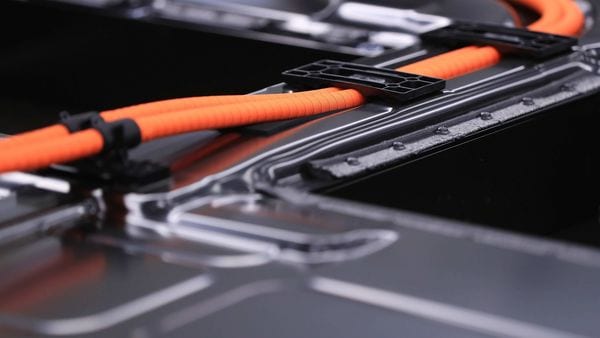 An electric cable runs along the lithium-ion battery of an all-electric Porsche AG Taycan luxury automobile on the production line inside the Porsche AG factory in Stuttgart, Germany. (This is a file photo used for representational purpose only.)

The global health crisis has deepened financial troubles at one of China’s biggest producers of lithium used in electric vehicle batteries.

The pandemic is set to batter this year’s demand for the material that’s vital in powering new energy transport. Prices are at four-year lows, and a deepening crisis in the global auto market could create more corporate turbulence even as the long-term outlook remains bright.

China’s two biggest suppliers, Tianqi Lithium Corp. and Ganfeng Lithium Corp., have both issued profit warnings in the past day, with Tianqi expecting a loss on low prices among other factors. The economic turmoil is weighing particularly heavily on Tianqi, which took on billions of dollars of debt to fund an investment in Chile in 2018.

The firm was downgraded by Moody’s Investor Service last month after flagging risks to its own debt servicing capacity. It’s even exploring a partial sale of its prized Australian assets to help pay down $3.5 billion in loans, according to an April 13 report in the Australian Financial Review.

“Tianqi’s repayment ability in the short to medium term will be under pressure," Zhang Jing, Shanghai-based analyst at Philip Securities said by phone. “The wider spread of the virus globally has impacted the lithium supply chain and the price may be subject to fluctuations that will further affect the company’s cash flows."

Tianqi Lithium didn’t immediately respond to an email and calls for comment.

The coronavirus crisis has strengthened headwinds for a lithium market that began 2020 facing a supply glut. Passenger car sales in China plunged 80% in the first two months of the year. Global lithium demand for the year will be 25% lower than pre-virus forecasts, according to commodities consultancy Roskill Information Services

Tianqi’s debt woes stem from loans used to fund the $4 billion purchase of a stake in a Chilean rival known as SQM in early 2018, at the height of a premature price boom. A tumbling market since then has left Tianqi struggling to pay off debt as profits have dwindled. The maturity of $2.3 billion of that loan was extended to November.

The company warned on March 23 that it has limited capacity to raise new financing as shares of its major subsidiaries have been pledged against the SQM loan. Repayment ability will depend on operational performance, it said.

“Tianqi Lithium’s liquidity is weak," Moody’s Investor Service wrote in a note on April 14. Refinancing risks are being exacerbated by the unprecedented effects of the global economic crisis on credit conditions, it said. Moody’s downgraded Tianqi to Caa1 from B2 on March 25.

The price of Tianqi’s $300 million offshore note dropped to a record low this week after halving since late March, Bloomberg-compiled data show. The company is offering at least part of its 50% stake in Talison Lithium, owner of the Greenbushes mine and Kwinana refinery in Australia, the AFR reported.

Tianqi said it’s expecting a net loss of between 450 million and 510 million yuan for the first quarter, compared with net profit of 111 million a year earlier. It cited lower lithium prices and sales amid “the industry cycle and coronavirus outbreak" as well as foreign exchange losses.

Still, there are already signs of a tentative recovery in China’s auto market, and electric vehicles are a key target for policy support as the government looks to reboot the economy. The coronavirus outbreak is also unlikely to derail the global auto industry’s long-term shift to electrification.

“As long as the company works out the short-term debt issues, it is not entirely pessimistic in the long run as there’s still demand for the metal," Philip Securities’ Zhang said.