Various stranded or parked cars got swept away by fast moving currents amid torrential rainfall in central China.Death toll due to heavy rainfall and flooding in the region has risen to 25.
By : HT Auto Desk
| Updated on: 21 Jul 2021, 05:14 PM 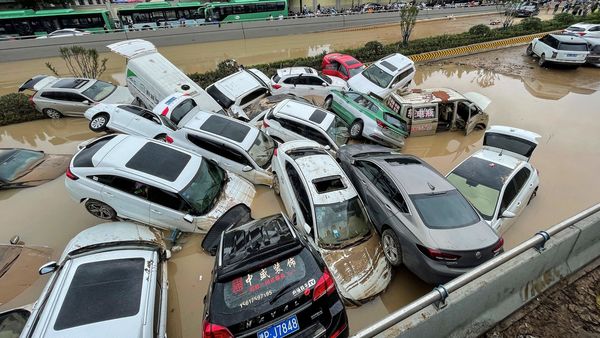 Cars sit in floodwaters after heavy rains hit the city of Zhengzhou in China's central Henan province on July 21, 2021.

Record breaking rainfalls devastated parts of Henan province in central China on Wednesday, leaving the city submerged and cars floating or sinking on flooded streets. Rains adversely affected daily lives of various commuters as roads turned into muddy rivers while many people got trapped in waist-deep flood waters along the streets.

Motorists waded through flood waters and stranded their vehicles as it became almost impossible to drive through the water. Various stranded or parked cars got swept away by fast moving currents and got covered with debris and dirt that the water brought along, BBC reported. Some cars got washed away and formed a pile of ruined and soiled vehicles.

(Also read | From Mumbai to Munich and beyond, flooding slams brake on daily life)

Water accumulated on streets due to breaking of several dams and reservoirs that had reached beyond their warning levels. Transportation links between cities via road or trains, broke down.

A subway train station in Zhengzhou region got flooded, leaving several passengers stuck in dark amid chest-deep water. Around a dozen people died in the subway flooding and around 500 people were rescued from the station that had turned into a big pool. Apart from this unfortunate incident, several other people died due to the rains, taking the death toll to at least 25 people.

The torrential rains in central China are the heaviest in about 1,000 years and have so far affected at least twelve cities in the Henan province. Across the regions, many citizens including those stuck on streets, subways, schools, offices, etc., have been rescued, and nearly 200,000 have been evacuated. There have been massive damages to properties as well.

Torrential rains also battered parts of Germany and Belgium affecting daily lives and damaging properties. Heavy rains in Indian cities including Mumbai and Delhi also led to damaging of vehicles and massive traffic snarls. Incidents of vehicles being trapped in sink holes in Delhi have also been reported.