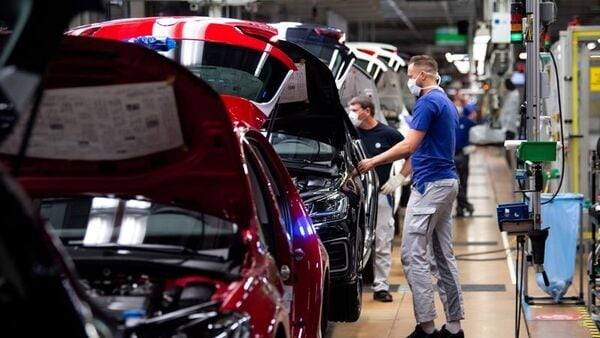 Car sales have dipped in China, the United States and Europe compared to the preceding year's levels due to the ongoing global semiconductor shortage and measures against a surge in Covid-19 cases. According to a report by Reuters, sales of cars in the Chinese market saw a rise in May compared to April, though it was still down by 16 per cent year-on-year, as per the Chinese Passenger Car Association. Data also revealed the overall car sales in China in the first quarter were 0.2 per cent higher compared to 2021.

Europe, on the other hand, showed sales of new cars have plummeted by 20 per cent. Based on the data by auto consultancy JATO, sales of electric vehicles which automakers are prioritising in the continent also registered a fall of 1.4 per cent. The report mentioned there has been a dip of 15 per cent in the sales of plug-in hybrid EVs since the environmental credentials of these vehicles are currently coming under the scanner of the European regulators. Europe's year-to-date sales have also registered a fall of 13 per cent as per JATO's data. This is the second-lowest level since 1991, added the report.

In the United States as well, car sales fell by 21 per cent year-on-year based on a study done by Deutsche Bank. This is compared to last year's increase in sales post the lockdown period that led to significant pent-up demand. “We expect sales to recover sequentially further through the year," added the report.

(Also read | Auto loans may get costlier in India. Here's why )

India too registered a slump in the passenger vehicle segment last month by 3.8 per cent. The sales figures stood at 2,51,581 vehicles compared to 2,61, 633 units in the same month last year, shared Society of Indian Automobile Manufacturers (SIAM).