The limited-edition Batmobile vehicle has been brought from Ohio.This model has been considered a classic since it first appeared in the 1989 movie.
By : HT Auto Desk
| Updated on: 01 Sep 2021, 09:25 AM 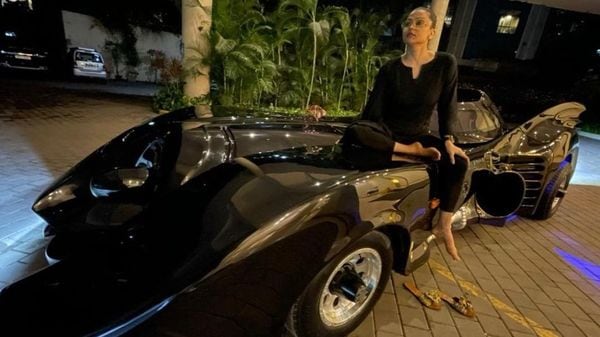 This Batmobile featured in 1989 Batman and 1992 Batman Returns movies.

Filmmaker Ahmed Khan has gifted his wife Shaira Ahmed Khan a limited-edition Batmobile on her birthday. This exclusive car is based on the classic design of the Batmobile that was driven by actor Michael Keaton in 1989's Batman and 1992's Batman Returns. It was designed by director Tim Burton and it is all set to appear again in the upcoming movie, The Flash.

After Shaira Ahmed Khan shared the pictures of the Batmobile on her Instagram page, it created a massive buzz. The post garnered comments from many popular actors.

The Batmobile has been brought from Ohio and the owner also shared a short video on her social media page.

The followers of the iconic superhero of Gotham City will know that a very important part of his nightly adventures happens in his Batmobile. And this Batmobile has been considered a classic since it was first featured in the 1989 movie. In terms of design this iconic model is sleek and a true representation of Batman's attitude even if some may disagree as Christopher Nolan's Dark Knight series created its own cult-like followers. Here, the Batmobile driven by Christian Bale was created by merging a Lamborghini Countach with a Humvee and then covering it with a cockpit of a fighter jet. With its gigantic futuristic tanker look, this Batmobile too won many hearts.

The new Batman movie lined up for 2022 that will feature Robert Pattinson as the superhero will showcase a brand new Batmobile. Pictures of it are already going around and it will look less aggressive than its previous models, said a media report.