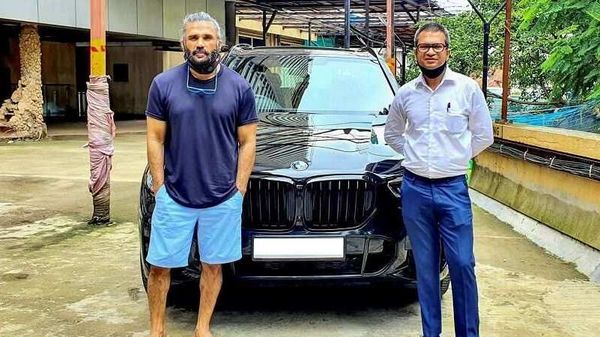 Suniel Shetty, one of the most popular action stars of Bollywood has recently added a new BMW X5 in Phytonic Blue colour to his collection. The keys of the new BMW X5 SUV were handed over to Shetty a few days back.

Shetty has a number of SUVs in his garage which include Hummer H3, Jeep Wrangler, Mercedes-Benz GLS 350D and E 350D, Toyota Prado, and Range Rover Vogue.

The luxury carmaker from Germany recently took to its social media handles to congratulate the iconic actor on his latest purchase. The X5 currently stands in a price bracket of ₹74.9 lakh (xDrive 30d Sport) and ₹84.4 lakh (xDrive 40i M Sport). All prices, ex-showroom.

#Repost @bmwnavnitmotorsmumbai When an iconic star meets an iconic car! Thank you, Mr. @suniel.shetty, for choosing @bmwnavnitmotorsmumbai as your luxury automobile partner. We are happy to offer you our service and we hope you will love riding our sporty BMW X5. We wish you happy motoring for many miles ahead! #BMW #BMWNavnitMotorsMumbai #X5 #BMWIndia @bmwindia_official

The BMW X5 sits below the X6 and X7 in India. It comes with a choice of petrol and diesel engines. It gets a 3.0-litre inline, six-cylinder engine that's rated to produce 340 hp of power and 450 Nm of torque. The other option include a 3.0-litre oil burner unit that's rated for 340 PS of power with 620 Nm of torque figures. The transmission options include an 8-speed automatic gearbox which transmits power to all wheels via a standard all-wheel-drive system.