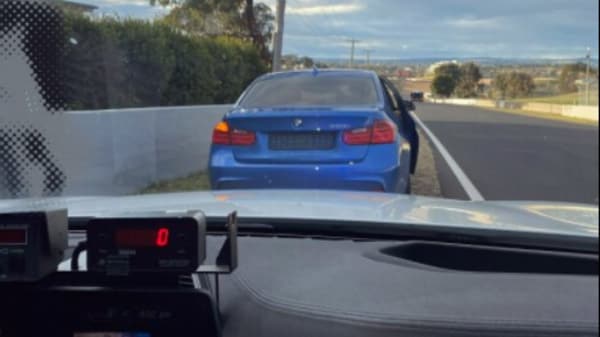 A person driving a BMW 3 Series was recently apprehended by police for overspeeding on Mount Panorama, located in Bathurst, New South Wales, Australia. The driver, racing the car at a speed of 119 kmph, said he mistook the road as a racing track.

Mount Panorama is known for hosting Bathurst 1000 motor race and Bathurst 12 Hour event and becomes a race track during such events. However, when no event is being conducted there, it is a public road with a 60 kmph speed limit. Pictures of the BMW and a narration of the incident was posted on the Facebook page of Traffic and Highway Patrol Command, New South Wales Police Force.

The driver, who had to pay a fine of 2,500 AUD (around $1,900), also got six demerit points. The officials also seized and suspended the offender's licence for six months. The registration plate of the car has also been confiscated and the police will keep the plate for the next three months. However, it is not known if the driver genuinely made the mistake or cooked up an excuse to get away from the clutches of the police. The BMW 3 Series car is powered by a 2.0-litre four-cylinder engine that can churn out 258 hp and 399 Nm of torque. It can touch a speed of almost 100 kmph in 5.8 seconds.

Many street circuits or public roads around the world are converted into race tracks during various motorsport events. There are over a hundred registered street circuits. One of the most popular of these is the Circuit de la Sarthe that hosts the famous 24 Hours of Le Mans and there is also the Circuit de Monaco that conducts the popular Formula One Monaco Grand Prix.