Union Minister Nitin Gadkari had announced on Friday that the draft notification to introduce Bharat NCAP to test safety of Indian cars has been approved.
By : HT Auto Desk
| Updated on: 25 Jun 2022, 16:23 PM 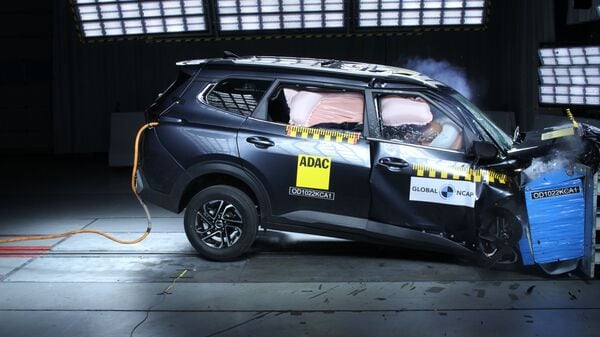 Bharat NCAP, India's own vehicle safety assessment agency, will start conducting crash tests of vehicles manufactured in the country from next year. The Ministry of Road Transport and Highways (MoRTH) has issued the draft notification, which was earlier approved by Union Minister Nitin Gadkari, saying that these tests will start from April next year. The notification clearly lays out the process and steps each vehicle will go through before the agency shares its safety ratings. It also mentions the categories for which the cars will be tested.

On Friday, Gadkari announced that the draft notification to introduce Bharat NCAP (New Car Assessment Program) to test safety of Indian cars has been approved. “Bharat NCAP will prove to be a critical instrument in making our automobile industry Aatmanirbhar with the mission of making India the Number 1 automobile hub in the world," Gadkari had said. Currently, vehicles sold in India depend on Global NCAP crash tests to get safety ratings.

According to MoRTH, Bharat NCAP has proposed a mechanism of awarding 'Star Ratings' to vehicles based upon their performance in crash tests. The Bharat NCAP tests will be applicable on passenger vehicles with sitting capacity of up to eight passengers besides the driver. The vehicles to be tested should be manufactured or imported in India and should not exceed gross weight of 3.5 tonnes.

Bharat NCAP will follow safety test benchmark set by Global NCAP. Bharat NCAP rating will be provided based on crash tests to evaluate adult occupant protection, child occupant protection and safety assist technologies. The crash tests will factor in the existing Indian regulations, allowing car manufacturers to get their vehicles tested at India’s own in-house testing facilities. At the end of crash tests, Bharat NCAP will provide safety ratings, or Star ratings, ranging from one to five stars.