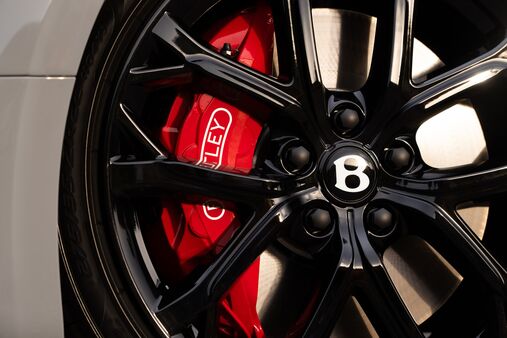 The short video teaser shows a wheel with five double spokes, painted in Black with and red brake calipers, boasting the Bentley emblem

Bentley Motors has released a new teaser video showcasing the sportier version of its Grand Tourers, which it is set to reveal on June 6. The teaser features the new trim of the Bentley Continental GT or Continental GTC model in the wild. The new sportier trims come after the brand recently launched the Azure trim, which is focused on comfort and well-being of occupants. Bentley is working on gradually expanding the trim options offered for its models.

The new sportier trims of the Bentley Continental GT and Continental GTC are more focused on driving performance and will come with striking visual design. The short video teaser shows a wheel with five double spokes, painted in Black with and red brake calipers, boasting the Bentley emblem. In the background, the roaring sound of the engine can be heard while we see a new S emblem.

Since Bentley says that it will offer a "new family of Continental GT and GTC models", it is likely that the carmaker will add a new trim level for its existing range of grand tourers, likely offered with more engine options apart from the W12-powered Continental GT Speed performance flagship.

The new S-badged trims will likely get sportier design cues focused on the wheels, bumper intake, grille, and tailpipes. All this, in combination with the matching bits and pieces inside the cabin such as carbon fiber inserts, aluminium inserts, and darker upholstery with contrasting stitching, could make the upcoming models appear sportier.

In mechanical terms, though the newer models are less likely to get more power from the V8 and W12 powertrains, the S-badged grand tourers could benefit from a more focused suspension setup and beefier brakes.