The new Bentley Bentayga EWB Azure First Edition comes with a first edition badge on the exterior which is also extended to the inside on the veneered fascia.
By : HT Auto Desk
| Updated on: 23 May 2022, 01:10 PM 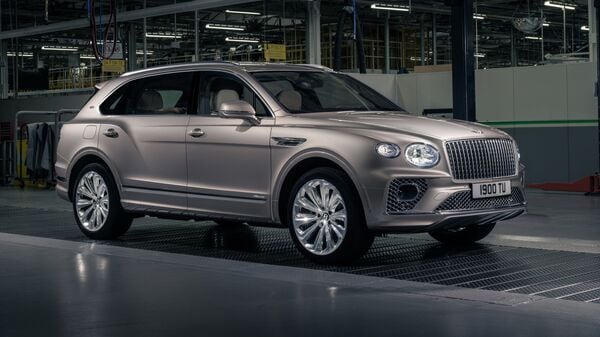 The new Bentley Bentayga EWB Azure First Edition comes with a first edition badge on the exterior which is also extended to the inside on the veneered fascia. This exclusive badging has also been embroidered on the seats of the new model. The Bentley Bentayga EWB Azure sits on 22-inch ten-spoke directional wheels and also comes with bright lower bumper grilles. the new car comes with quilted seats, mood lighting, a heated steering wheel and increased driver’s assistance aids as well.

There are illuminated treadplates that help the users to get into the cabin along with powered rear doors that close at the push of a button. The interiors offer exceptional and extended space, states Bentley. There is a Bentley Diamond Illumination as standard for the first edition models, LED lights in 30 user-controlled colours that shine through tiny perforations in the handcrafted quilted leather trim for an appealing visual effect.

The interior also offers a sound system from Naim which claims to be the world’s best in-car sound system with 1,720 Watts of power across 20 speakers. There is an optional 10.1-inch screen Bentley Rear Entertainment system that will allow rear-seat passengers to stream content from their mobiles on the backs of the front seats.

Bentley informs customers can choose from a standard palette of 16 exterior finishes or can also go for the Extended Paint Range, which will offer them a total of more than 60 colours.