Benelli likely to use KTM's powertrains in future models

QJ Motor, owner of Benelli, has previously collaborated with KTM for its Moto 3 campaign, so the possibility of a licensing agreement between the two-wheeler giants can't be eliminated.
By : Prashant Singh
| Updated on: 15 Apr 2022, 09:59 AM 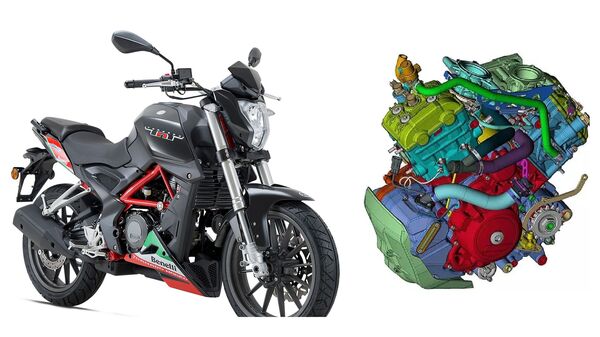 The configuration of the patented engine (right) appears similar to the KTM’s 1031cc V-twin engine which is found on the 1290 Super Adventure.

QJ Motor, the Chinese owner of Benelli, has filed for a new patent which appear to be one of its upcoming engine designs. As per the recently leaked patent documents, the configuration of the patented engine appears similar to the KTM’s 1031cc V-twin engine which is found on the 1290 Super Adventure and the 1290 Super Duke R bikes.

For the record, QJ Motor had also previously filed an engine patent similar to the KTM's 799cc engine. The previous patent was registered earlier this year in January reminiscing KTM's 799cc LC8 engine. However, the previous patent had minor tweaks near the cylinder head and cases castings, while the new patent gets no alterations at all. The previous 799 cc patent also had TNT logo over it, indicating that it could be reserved for a model in the company's TNT range.

QJ Motor has also previously collaborated with KTM for its Moto 3 campaign, so the possibility of a licensing agreement between the two-wheeler giants can't be eliminated. If such is the case, these engine may also make way into the Benelli's high displacement lineup.

The freshly filed patent has been named QJ2V108MYL. Breaking it down reveals that the initials QJ, indicate the manufacturer's name, 2V likely stands for its V-twin configuration and 108 is the bore size. Also, the bore size for the KTM’s 1301cc LC8 stands at 108 mm.

Moreover, QJMotor also owns CFMoto and it has also partnered with Harley-Davidson and MV Agusta under which it has sourced powertrains to supply to Benelli's range.