UK Police has promised the 'most robust action possible' against the driver who went on a joyride on his 92,000-pound luxury car breaking every possible rule.
By : Sabyasachi Dasgupta
| Updated on: 26 May 2020, 11:57 AM 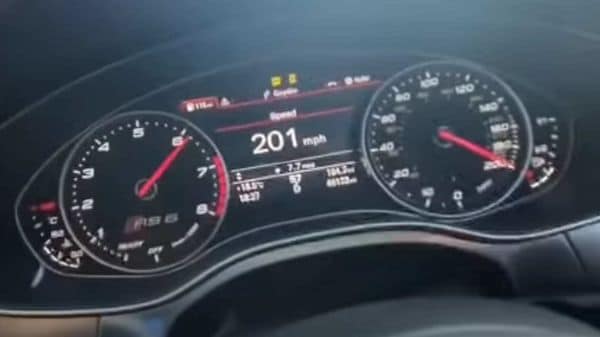 It took just 55 seconds for the driver of the Audi RS6 to hit 200mph on a UK highway.

An unnamed person who self-filmed a speed rush on a public road in UK has found himself in legal trouble. Recently, the person uploaded a video on YouTube showing him driving his Audi RS6 one-handed down a road believed to be in West Sussex at break-neck speed, much higher than the speed limit on the stretch. The UK Police has vowed to find the traffic offender.

The video shows the Audi RS6, with a power output of 550 bhp, picking up speed from 61mph to 116mph in a matter of just five seconds. It took him another 50 seconds to hit 201 mph (323 kmph) on the relatively empty stretch of the road. That is almost three times more than the speed limit of 70mph on the road. All this while he was filming his feat possibly on his cellphone with just one hand on the steering wheel of his 92,000 pound (around ₹85 lakh) Audi RS6.

The video, which was widely shared on social media platforms, has invited trouble from the law enforcement agencies in the UK. The police has launched a manhunt to find the driver who violated traffic norms driving at dangerous speed on a public road. After the video drew massive criticism from social media users, Andy Cox, a police official working with Sussex Police took note, and assured action against the driver.

Cox took to Twitter, saying, “Aware of this horrific driving. I have tasked some investigative work to see if we can identify the car involved and relevant location. Needless to say if we do we will seek the most robust action possible."

Aware of this horrific driving. I have tasked some investigative work to see if we can identify the car involved and relevant location. Needless to say if we do we will seek the most robust action possible. #RoadSafety #London

Speeding has been one of the rising cases of traffic violation amid lockdown implemented across several countries. Drivers have been found on the wrong side of the law, especially in US and UK, as they tried to take advantage of unusually empty roads during the lockdown.

Recently, A British man has received a jail term of 26 months after he was convicted in a reckless driving case which involved him speeding away from cops at 160 kmph with a baby on-board.

German carmaker Volkswagen has recently announced that all of their vehicles will now come with a top speed limit of 180 kmph.