Ather Energy is the main sponsor of Gujarat Titans and had its name placed prominently in front of the team jersey.
By : HT Auto Desk
| Updated on: 02 Jun 2022, 09:42 AM 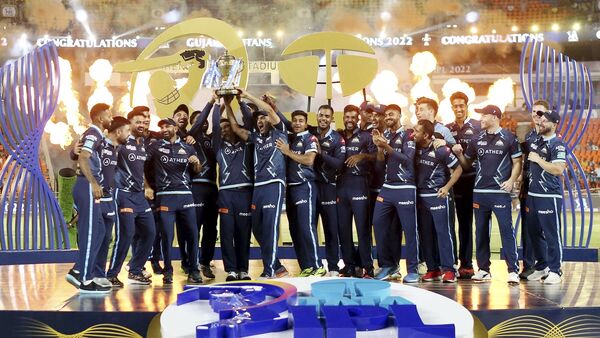 Gujarat Titans players with the IPL trophy after winning the final T20 cricket match of the Indian Premier League 2022.

Ather Energy issued a congratulatory message to Gujarat Titans after the franchise won the Indian Premier League or IPL 2022 trophy in its debut season. The Hardik Pandya-led franchise topped the points table before going on to defeat Rajasthan Royals in the qualifier as well as in the final to lift the crown. For Ather, which had entered into a two-year agreement and has its name splashed prominently across the team jersey, it was an example of what hard-work can result in.

In a press statement, Ather Energy celebrated the win and informed it is looking forward to more such fruitful years of association. “We are thrilled about Gujarat Titans winning the IPL Trophy in their debut season. Their passion and never-say-die attitude carried them through the tournament, and these are traits that we at Ather Energy truly identify with," said Ravneet Phokela, Chief Business Officer at Ather Energy. “Despite being a relative newcomer in the biggest cricket league in the world, the team played a bold and fearless brand of cricket which won the hearts of cricket gurus and fans. In a league dominated by the well-established teams, GT performed consistently well, very rarely looking vulnerable."

Ather is a prominent player in India's electric two-wheeler space and while the company seemed to draw a comparison between how the IPL team fared to how it is taking on more established rivals in its own game of electric mobility, all while not making an outright reference. Phokela had previously said that both Ather and Gujarat Titans are relatively new in respective fields which ensures a ‘hunger to make a difference.’

Earlier this year, Ather Energy had announced a multi-year contract with Gujarat Titans as the team's main sponsor. "We are delighted to join hands with Ather Energy, a young and flourishing company that has been leading the way in the EV sector in India," Arvinder Singh, COO of Gujarat Titans had said at the time.