Mercedes will expand its tie-up by starting to supply hybrid and electric powertrains to Aston Martin.In exchange, Aston Martin will issue new shares to Mercedes, boosting the German carmaker’s stake.
By : Bloomberg
| Updated on: 28 Oct 2020, 08:02 AM

The British carmaker is raising a total of about 1.3 billion pounds ($1.7 billion) through bond and stock offerings, most of which will be used to refinance existing debt. Daimler’s Mercedes-Benz also will help Aston Martin bring hybrid and electric vehicles to market, and in return will become a major shareholder without spending cash.

The capital raise marks the latest attempt by the carmaker synonymous with James Bond films to turn things around after a disastrous two years as a public company. Soon after a group led by Canadian fashion mogul Lawrence Stroll put 536 million pounds into Aston Martin at the end of January, the automaker warned it was running low on cash in the midst of the coronavirus pandemic.

Mercedes will expand a tie-up that started in 2013 with eight-cylinder engines by starting to supply hybrid and electric powertrains to Aston Martin. In exchange, Aston Martin will issue new shares to Mercedes, boosting the German carmaker’s stake from 2.6% to as much as 20% over three years.

“They hugely believe in the upside," Stroll said of Mercedes in a phone interview. “We’re getting all the latest and newest and greatest access to all their technology, which we did not have in our previous seven-year relationship, by opening the door to them with the shareholding and them being the second-largest shareholder after me."

Aston Martin tried banking off Ferrari NV’s successful 2015 IPO with its own listing three years later, but disappointing sales and challenges keeping inventory in check have sent the shares plunging 91% since their debut. After Stroll bailed out the automaker early this year, the company poached the head of Mercedes’s high-performance brand AMG to be its new chief executive officer.

“The opportunity draws numerous parallels to our early 2016 investment in Ferrari," Permian said in an emailed statement. “We believe that Aston’s improved balance sheet and expanded strategic partnership will propel best-in-class execution from this new and highly reputable team and ultimately lead this renowned luxury brand to maximise shareholder value over the coming years."

Daimler CEO Ola Kallenius told reporters earlier this month the company has no intention to acquire Aston Martin but said their technology partnership will remain in place. He has been cutting costs to free up funds for hybrids and EVs, including for the AMG division. Supplying electric-car technology to Aston Martin will boost economies of scale beyond Mercedes’s own product range.

After the fundraising, Aston Martin will have more than 500 million pounds of cash, the company said in a stock-exchange filing. That amount is sufficient for its medium- and long-term requirements, Chief Financial Officer Ken Gregor said on a conference call. The company also released third-quarter revenue and earnings that were largely in line with analysts’ estimates.

Tobias Moers, the former AMG boss who became Aston Martin’s CEO in August, said the company’s initial partnership with Mercedes formed in 2013 “was just to open the door."

“Now, we have access to the whole powertrain lineup of AMG, for example, from the low end to the high end," he said in a phone interview. “We can use their technology to transform it a little bit more bespoke for our cars in the future." 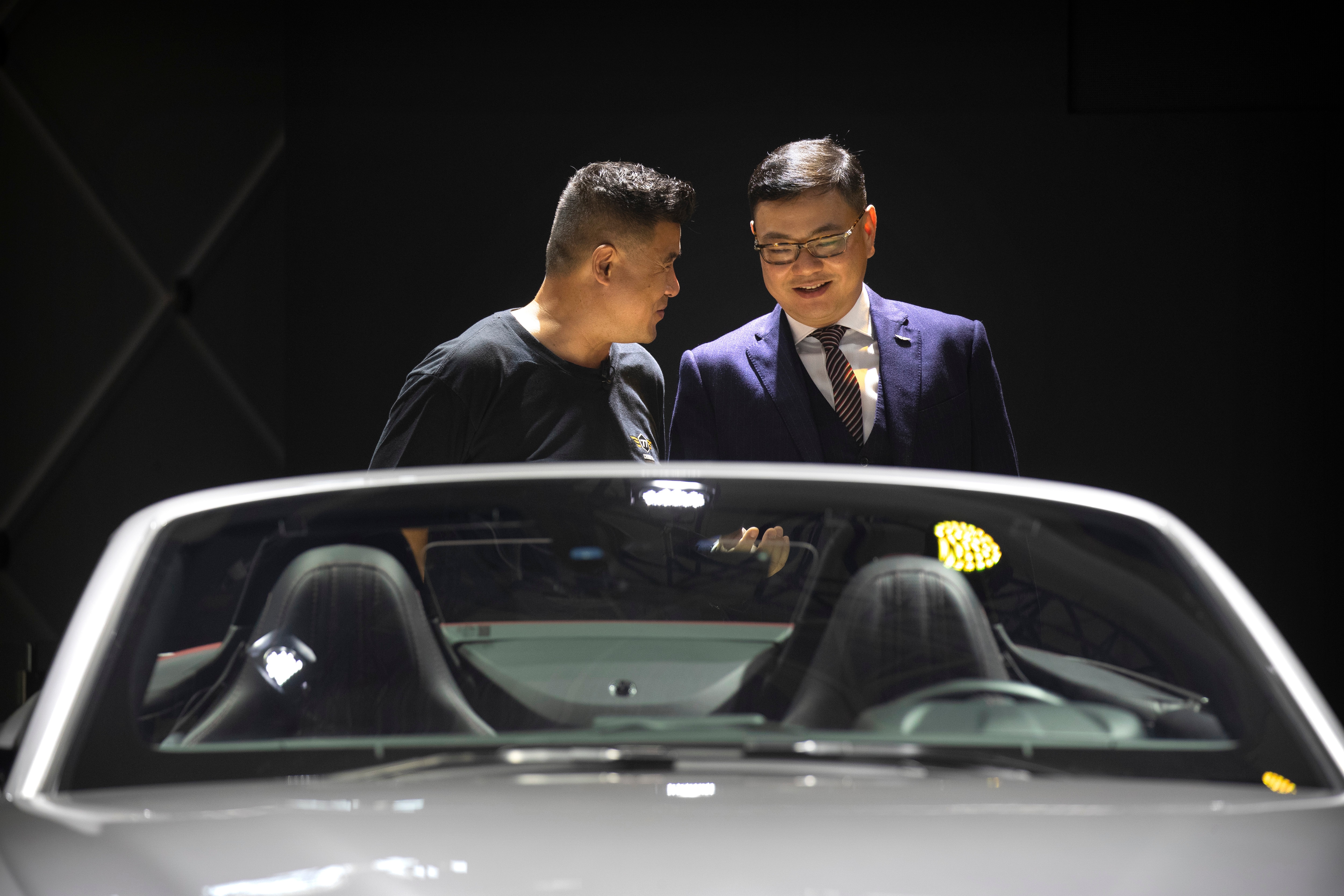 File photo - A visitor and a staff mamber talk at a display from Aston Martin at the Beijing International Automotive Exhibition. (AP)

Aston Martin’s 285 million pounds of notes due April 2022 were up 10 pence to 100.1 pence after the company announced the refinancing plans. That’s the biggest jump since the notes were issued in 2017, and the highest price in two years, according to data compiled by Bloomberg.

The company has a combined $1.3 billion of debt in financial instruments due in 2022. With proceeds from a new 840 million pounds-equivalent of senior secured notes, the company will push its maturity wall to 2025.

The initial pricing being discussed for the new notes is said to be in the 8% to 9% range, according to a person familiar with the matter. That’s well above the 6.5% coupon paid by its existing $400 million and $190 million notes, but below the 12% interest it had to offer to investors the last time it tapped debt markets more than a year ago.

Aston Martin also arranged 259 million pounds-equivalent of new second-lien notes due in 2026 with a 13.5% coupon, and a refinanced 87 million-pound revolving credit facility due in 2025.