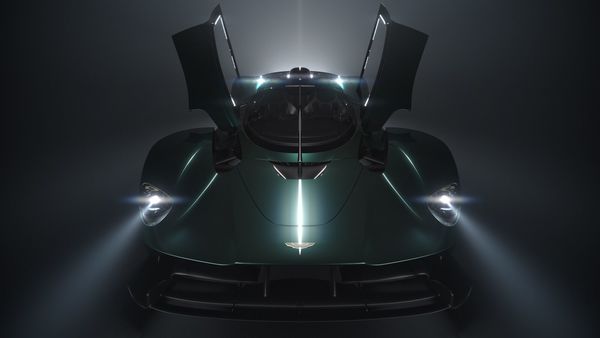 Aston Martin will reveal the product on August 12 at a private event.

Aston Martin recently teased an image of a new and roofless model of Valkyrie sports car and it has generated a fair bit of buzz in the automotive world. That this is a roofless Aston Martin Valkyrie can be ascertained from the seats that seem to be sticking above the frame of the windshield. One can also take a hint from the doors which in this case are in scissor-style and not gullwing doors which require a roof.

Aston Martin says that it will introduce two new products, a global product and one for North America, at Pebble Beach Concours d’Elegance this year. This marks Aston Martin's 70th anniversary of the first sports car introduced at the car show. Chief executive officer Tobias Moers shares that the company sold some of its greatest cars in the United States and Canada. “Around a quarter of all the cars we have ever made have been sold in North America; American and Canadian investment, management and support have played a major part in the company’s history," he adds.

Aston Martin informs that the product that is gearing up for its global debut will be revealed at a private VIP event on August 12. However, the brand has not revealed any details about this product, guesses are being made that its specs may be as impressive as its model with a roof, if not more.

Under the hood, the Valkyrie boasts a Cosworth-sourced 6.5-litre V12 hybrid engine that can create a power of 1,160 horsepower and a peak torque of 900 Nm. The company also says that the hypercar can touch the speed of 96 kmph from zero in a mere 2.5 seconds.