Aston Martin informed that the production of Valkyrie is in full swing and deliveries have been planned for upcoming weeks. Aston Martin Valkyrie comes with a V12 hybrid engine that generates power of 1,155 PS.
By : HT Auto Desk
| Updated on: 06 Nov 2021, 11:11 AM 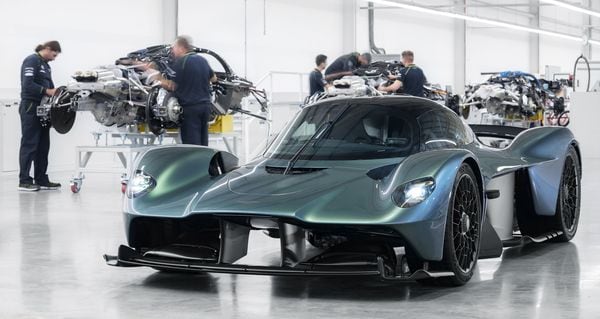 Aston Martin Valkyrie coupe is all set to hit the roads.

Aston Martin announced that its highly-anticipated Valkyrie coupe has entered full production and the first customer car is now complete. The ultra-luxury British automaker is planning to begin deliveries in the coming weeks.

Aston Martin Valkyrie is being manufactured at the company's UK Headquarters in Gaydon. The brand informed that a dedicated project delivery team is managing the build right through to delivery in an area commissioned for the production of the hypercar. It also stated that a team of skilled technicians are hand-building each of these 150 cars and each unit taking over 2000-man hours to create. Each of these units, before the delivery, will be track-tested at the Aston Martin high-performance facility.

The company's chief executive officer Tobias Moers said that it is a proud moment for the company as it successfully completed its first ever hypercar. “The Aston Martin Valkyrie programme has tested everyone who has worked on it to the limit but the commitment to the dream has produced a truly incredible car, an F1 car for the road," he added.

The Valkyrie that incorporates concepts and borrows technologies directly from Formula One under its hood boasts a V12 hybrid powertrain. It is capable to generate a massive power output of 1,155 PS. The ultra-luxury auto brand also revealed the Spider version of the hypercar that comes without a roof a few months ago. Aston Martin Valkyrie Spider features a powertrain of a 6.5-litre V12 engine that has been combined with a Rimac-developed e-motor. The company plans to build only 85 units of this version.