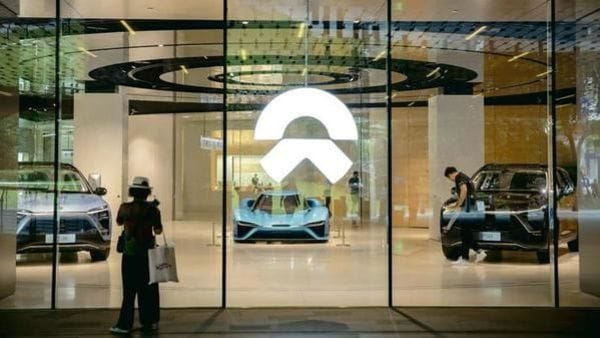 Vehicles of electric carmaker NIO Inc. on display inside the NIO House showroom at the Shanghai Tower in Shanghai, China (Bloomberg)

China’s most high-profile challenger to Tesla Inc. has had a tough year, and 2020 isn’t looking any easier.

Electric-car maker NIO Inc. has accumulated a deficit of almost $6 billion since its founding in 2014, spending extensively on marketing and product development for a foothold in the burgeoning market. Third-quarter earnings, which are due to be released as soon as Monday, are expected to show there’s still a long way to profitability.

While NIO has slashed jobs and started to scale back marketing expenditures, its finances remain critically strained. China’s electric-car market is slowing as the government reduces subsidies, and competition is getting tougher with Tesla preparing to start sales of its China-built Model 3 sedans.

“NIO’s balance sheet implies serious liquidity risk," said Robin Zhu, an analyst at Sanford C. Bernstein in Hong Kong with an underperform rating on the stock. “The key will be whether they are able to announce major new financing."

Shares of NIO have plunged 60% since the company had its initial public offering in New York last year. That’s left it with a market value of $2.6 billion, compared with Tesla’s market capitalization of $78 billion.

At the root of NIO’s high cost level is a marketing strategy that includes everything from advertising campaigns to so-called NIO Houses, showrooms where customers can gather to spend time, work and eat. That’s left the company burning cash faster than much bigger Tesla.

The first NIO House, which opened in Beijing in 2017, occupies more than 32,000 square feet on two levels in one of the city’s most expensive districts. NIO has since set up about 20 more, each featuring a showroom and some equipped with a users’ lounge, theater, meeting rooms, work spaces, library, open kitchen, and camp activities for customers’ children.

“There are many activities for kids every week," said Yuan Ye, an owner of a NIO vehicle and mother of a four-year-old, and a frequent visitor to a NIO House in Beijing. “It has saved me a lot from pre-school tuition."

NIO had $207 million in selling, general and administrative costs, including marketing and promotional events and rent, in the second quarter. NIO Houses and related promotions probably accounted for $72 million of that, estimates Robert Cowell, an analyst at 86Research, a Shanghai-based equity research firm. The carmaker also spent $189 million in research and development.

Yet revenue in the second quarter was just $221 million. Though demand has been picking up -- NIO delivered 4,799 cars in the third quarter through September, a 47% increase from a year earlier -- the company is far from break-even. It probably lost $381 million in the third quarter, according to the average of four analysts’ estimates compiled by Bloomberg. For 2020, the average loss estimate is $1.2 billion on sales of $1.7 billion.

To rein in costs, NIO has shifted from adding NIO Houses to setting up much smaller stores called NIO Spaces of about 1,000 to 2,000 square feet. NIO Houses remain important and contribute to building a premium brand, NIO said in an emailed response to questions.

To fuel demand, NIO has launched promotional incentives including 0% interest for three years and guaranteed subsidies for cars registered before the end of February 2020. The company is also bringing out a streamlined sport utility vehicle, the third SUV in its lineup.

With just about $500 million in cash, equivalents and short-term investments as of June 30, NIO has had to take steps to fill up its coffers. It said in September that co-founder William Li and shareholder Tencent Holdings Ltd. had each subscribed to $100 million in convertible notes. NIO said the bond sale and its financing projects are proceeding as planned, without elaborating.

“NIO is still at risk of running out of cash, even counting in the $200 million convertible notes," said Jason Chen, an analyst at Blue Lotus Capital Advisors. “It needs to secure more funds, ramp up sales much more quickly, and significantly cut costs to sustain its business."