Conducted in April with a sample size of 3,000, the survey covered categories including travel, social activities and investments among others during this pandemic.
By :
| Updated on: 16 May 2020, 04:27 PM 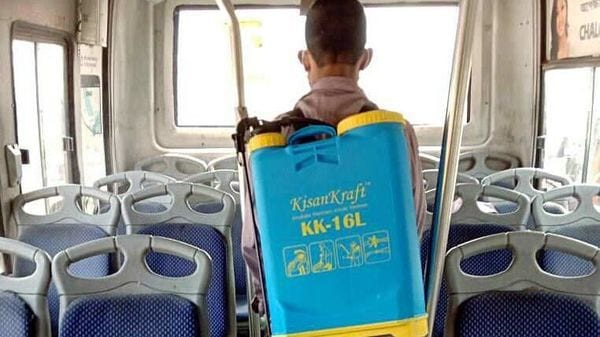 A Municipal personnel sanitizing a public transport bus during the lockdown.

Once the lockdown ends, more than 70 per cent Indians would avoid public transport while 62 per cent indicated to avoid cab-hailing apps like Ola and Uber, a new survey revealed on Friday.

The findings showed that 71 per cent people would reduce shopping in malls and supermarkets and 80 per cent said they will continue with online shopping, according to market research and analysis firm Velocity MR.

At least 50 per cent of people in India anticipated increase in unemployment rates, followed by lack of job security in the private sector (53 per cent) due to the Covid-19 pandemic.

"Our study shows that in the next six months to one year, 47 per cent are planning to invest in mutual funds followed by stock/shares (33 per cent) and gold (30 per cent)," said Jasal Shah, Managing Director and CEO, Velocity MR.

Nearly, 77 per cent people intend to use Arogya Setu app and more than 57 per cent will maintain social distancing and washing and sanitizing hands at regular intervals as a significant change in social behaviour even after the end of the pandemic.

Post lockdown, banks can also get a major boost through their digital payment services as close to 90 per cent of respondents are most likely to shift from cash to digital payments.

"Almost 80 per cent of respondents considered the non-availability of alcohol and cigarettes as one of the major benefits, and 74 per cent considered work from home advantage and not a disadvantage," the survey said.

Conducted in April with a sample size of 3,000, the survey covered categories including shopping habits, purchase habits, travel, social activities, investments, social responsibilities during this pandemic.