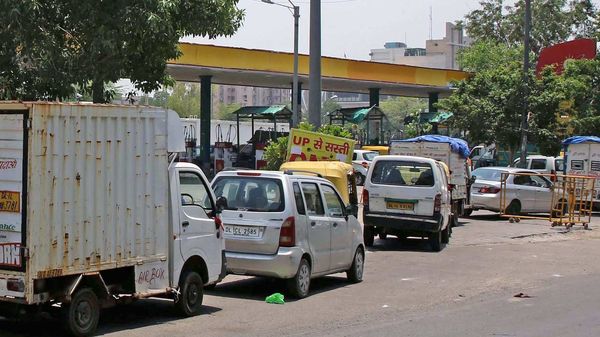 File photo: Vehicles line up at a CNG station.

Union Minister of Petroleum and Natural Gas and Steel Dharmendra Pradhan on Thursday dedicated 56 CNG stations to the nation.

Speaking on the occasion, Dharmendra Pradhan said that in the last 6 years, the number of CNG stations has gone up from 947 to over 2300. He said that presently more than 400 districts of the country are being covered by the City Gas distribution network. Petroleum and Natural Gas Regulatory Board (PNGRB) is preparing to come out with 11th round of CGD bidding round, after which 50-100 additional districts will get the clean fuel.

Pradhan said that India is moving towards becoming a gas-based economy. He said that the government is committed to provide infrastructure to facilitate this, and 17,000 km long pipeline is being laid for the purpose. He said that places like North-eastern states and eastern India, which were deprived of access to gas, are also being covered. Efforts are underway to complete the national Gas Grid in a time-bound manner.

He said that the Government with the spirit of Sabka Saath, Sabka Vikas has worked to usher in a blue flame revolution in the country. Over 28 crore households have been provided LPG connections and an ambitious plan to provide 5cr households with PNG connection is underway.

According to the press note, the Minister expressed his gratitude to the finance ministry and the Reserve Bank of India, for facilitating growth of CBG ecosystem in the country. He said that Compressed Bio-gas (CBG) has been included in the priority sector by the RBI, which will help the entrepreneurs to get cheaper and easier access to loans.

Talking about the waste to energy concept, the minister said that India, despite being very low in per capita pollution, has taken steps to adopt renewable sources of energy in a big way. He specially mentioned about the efforts being made by Haryana and Uttar Pradesh to adopt clean fuel, to reduce the pollution level in the National capital region (NCR) during the winter. He mentioned the recent initiative of IOCL, NTPC and SDMC to convert the municipal waste at Ghazipur into gas.

The press note further said, the Minister called upon the entrepreneurs to take advantage of the policy reforms brought in the energy sector. He said that capital requirement for setting up of retail outlets has been reduced from ₹2000 crore to ₹250 Crore, and even the start-ups can take part in it now.

He said that Retail outlets can not only sell the traditional fossil fuels, but also dispense gas, and put up electric vehicle charging stations. He appealed to the entrepreneurs to take advantage of policy reforms, compete and bring in innovation in fuel marketing which will be beneficial for the consumers.

The Minister also spoke about the recent initiative of battery swapping station set up in Chandigarh, which can be replicated elsewhere also. He also called upon the CGD players to set up CBG stations for which he said that cheaper and easily available raw material is abundantly available, and the OMCs are providing uptake guarantee at remunerative prices.

The Minister said that India is one of the largest energy consumers in the world, and this would further go up as the country marches ahead on the path of progress. Recalling the Hon. Prime Minister's clarion call of energy justice and Aatamnirbhar Bharat, Pradhan said that energy available to the people should be sustainable, accessible, affordable and this would lead to energy security.