The 911 GT3 RS is offered with a Clubsport and Weissach package. The buyer can get the Clubsport package at no extra cost.

Porsche has unveiled the latest generation of 911 GT3 RS for the global market. It is based on the latest 992 generations and the manufacturer has made a host of mechanical upgrades. There are also cosmetic upgrades that are done to improve the aerodynamics of the vehicle. This has been done to carry higher speeds and lower drag on the race tracks.

Porsche 911 GT3 RS comes with a 4.0-litre and has a screaming red line of 9,000 rpm. The engine produces 525 hp of max power and 465 Nm of peak torque. It comes mated to a 7-speed Porsche Doppelkupplung (PDK) transmission. There is no manual gearbox on offer so the enthusiasts might be a bit disappointed. Having said that the PDK is faster when it comes to response time and shift time. Moreover, Porsche has shortened the gear ratios when compared to the 911 GT3. 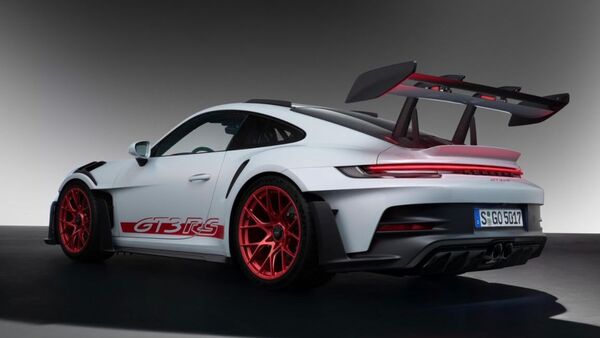 The rear wing along with other aerodynamic upgrades provides a total of 409 kg of downforce at 200 kmph.

Porsche says that the 911 GT3 RS can hit a ton in 3.2 seconds and has a top speed of 296 kmph. It would not be surprising for the 911 GT3 RS to hit the100 kmph mark in under 3 seconds. Porsche is known for underpromising and over-delivering when it comes to acceleration times. There are three driving modes on offer, Normal, Sport and Track.

Porsche has made a lot of aerodynamic improvements which include a new rear wing. It is the first Porsche vehicle to come with a rear wing that is higher than the car's roof. The 911 GT3 RS is also the first production vehicle of Porsche to be fitted with a DRS or drag reduction system. The huge rear wing also acts as an air brake.

What is interesting is the new adjustable suspension. There are rotary knobs on the steering wheel through which the driver can adjust rebound and compression settings. Even the rear differential can be adjusted through the knobs.