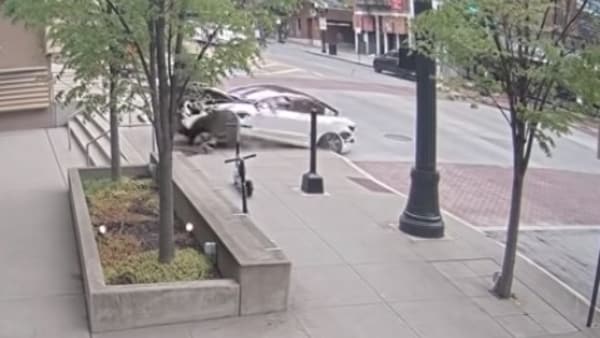 The Tesla Model 3 was running at 113 kmph. (Image: Youtube/TheColumbusDispatch)

A Tesla Model 3 went flying in Columbus, Ohio and crashed into a convention centre. A video has emerged online showing the electric compact sedan getting airborne before crashing into the building in an accident. Miraculously, no one was injured seriously due to the accident, reports NBC4 Columbus. The report claims the Tesla Model 3 was cruising at a speed of 113 kmph when the driver failed to brake, which resulted in the crash.

(Also Read: Buying an electric vehicle? Know the tax benefit you can avail)

Before hitting the building, the car drove through a red light and lost control of the brakes at an intersection. The report claims that the driver appeared to speed up in order to make a yellow light and made n attempt to slow down before crashing into the building.

It claims that the damage done by the car to the building would cost between $250,000 and $350,000 to repair but things could have been much worse. Along with the pedestrians and other vehicles in the area at the time of the accident, the convention centre was hosting several events on that fateful day.

As a result of the accident, the driver suffered some injuries and was taken to the nearest hospital. The report cited the local police who said that the driver is in stable condition. The police report doesn't mention if the vehicle was running on Autopilot or not at the time of the crash.

This is not the first time a Tesla Model 3 was involved in such a serious accident. Previously as well, Tesla Model 3 and other Tesla cars too have been involved in serious mishaps. In many cases, the automaker's famous Autopilot semi-autonomous driving assistance system was accused of faults. In some other cases the drivers were at fault.