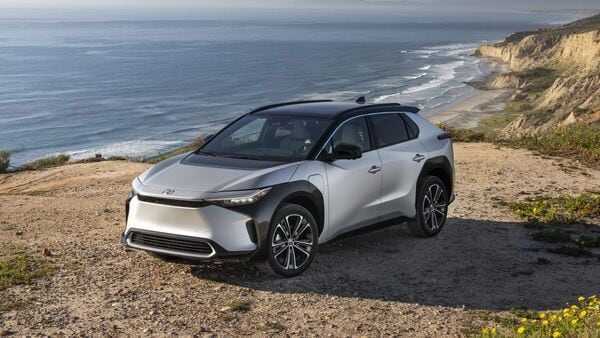 Toyota bZ4X competes with the likes of Hyundai Ioniq 5 and Kia EV6 among others.

Toyota Motor Corp is offering to buy back its all-electric bZ4X SUV from owners after they were directed to not drive it as the wheels of the EV might come off. According to a report by Bloomberg, Toyota has offered owners free loaners along with credit worth $5,000 towards the payment of existing loans or the cost of cars that are paid off.

Toyota, in June, issued a recall of around 2,700 units of its bZ4X SUVs due to the risk of the wheels of EV getting loose. Toyota had submitted the recall of the electric SUV to Japan's transportation ministry. The Japanese automaker had informed that out of the 2,700 units of the Toyota bZ4X, 2,200 units came from Europe while 260 from the United States followed by 10 units from Canada and 110 units from Japan.

(Also read | Toyota bZ4X may get a GR variant: Report )

A past report stated that Toyota had issued an apology for the inconvenience that has been caused due to this fault in the EV. The Toyota bZ4X has been newly launched and not many have taken its delivery. The Toyota bZ4X is the first electric SUV from the automaker that it launched in April this year.

The Toyota bZ4X is based on the Japanese automaker's TNGA platform. The fully-electric SUV promises a range of 559 km. Toyota offers the EV in two variants, one with a single motor and the other one with two motors. The former can generate a power output of 201 bhp while the latter can churn a power output of 215 bhp. The Toyota bZ4X electric SUV rivals the likes of the Hyundai Ioniq 5 and Kia EV6. When the company launched this EV, it expected to sell around 5,000 units of it.