Tesla Berlin Gigafactory, which is worth $5.5 billion, is the second manufacturing unit that the EV company has built outside the United States.
By : HT Auto Desk
| Updated on: 20 Jun 2022, 11:17 AM 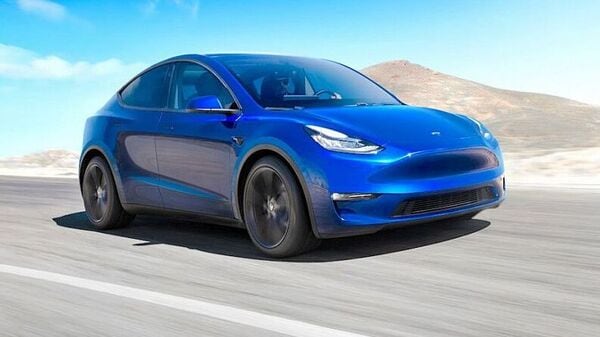 Tesla Berlin Gigafactory which finally started production in March after a long delay achieved the milestone of manufacturing 1,000 Model Y electric cars in a week. Tesla CEO Elon Musk took to Twitter to share this update, writing, “Congratulations to Giga Berlin team on making over 1000 cars in a week!" Tesla is aiming to achieve an annual production rate of 50,000 electric vehicles, though this might be an early deduction as the factory is expected to produce more than 50,000 units per year.

Tesla's Berlin Gigafactory which is worth $5.5 billion is the second manufacturing unit that the EV company has built outside the United States. This factory of Tesla currently manufactures the Tesla Model Y Performance version only which features 2170-type cylindrical battery cells. According to a few reports, the factory produced around 8,865 Model Ys from March through May. This figure is reportedly half of the units that Tesla's Shanghai Gigafactory produced when it launched the Model 3 and Model Y EVs.

In a previous report, it has been stated that Tesla is hiring 500 to 600 people every month for its German factory. The EV company is also reportedly working along with the country's national employment agency to recruit workers who are no longer required at the German automakers' plant. Tesla had already taken in around 4,100 to 4,500 workers for the factory among which around 10 per cent are primarily from Poland.

(Also read | Tesla hikes prices in the US, all models become pricier )

This gigafactory of Tesla's has been running two shifts since May 23. The EV company has already planned a third shift that is due to start by the end of the year. The factory is aiming to cater not only for the EV demands in Germany but to the rest of Europe as well.