Tesla under NHTSA scanner over fatal crash in Florida

The Tesla electric car reportedly rear-ended a parked tractor-trailer killing two people inside the EV.
By : HT Auto Desk
| Updated on: 11 Jul 2022, 06:16 AM 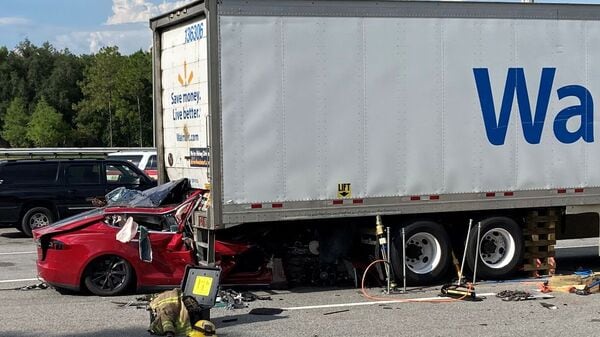 A Tesla that rear-ended a tractor-trailer at a rest area off Interstate 75 killing both the driver and passenger, is seen at the crash site near Gainesville, Florida, U.S.

Electric car major Tesla is again in trouble owing to a crash in Florida, which killed two of its occupants, a 66-year-old Tesla driver and a 67-year-old passenger. The National Highway Traffic Safety Administration (NHTSA) said on Friday that it will open a special investigation into the incident. A 2015 Tesla EV reportedly rear-ended a parked tractor-trailer in the Gainesville area at a rest area off Interstate 75. Both people in the Tesla were pronounced dead at the scene. However, it is not clear yet if the car was using Autopilot during the moment of the crash.

Meanwhile, NHTSA has also confirmed that it had opened a special investigation into a fatal pedestrian crash in California involving a 2018 Tesla Model 3. In this case, the advanced driver assistance system or Autopilot was suspected of having been in use. Tesla cars have been increasingly reporting crashes.

NHTSA has previously opened 36 special crash investigations - including the California crash - involving Tesla cars in which advanced driver assistance systems like Autopilot were suspected of being used since 2016, reports Reuters. A total of 17 crash deaths have been reported in those Tesla investigations, including the latest Florida crash. This crash in Florida reportedly bears similarities to a series of crashes under investigation by NHTSA.

Tesla Autopilot, which is a semi-autonomous driving assistance system by the automaker has garnered a lot of attention for its features. However, the technology has been under the scanner for being allegedly faulty. In June this year, NHTSA upgraded its defect probe into 830,000 Tesla cars with Autopilot, a step before it could seek a recall for the vehicles with faulty technology.