Mahindra and Mahindra will drive in the electric version of its flagship XUV300 SUV on September 8. It will rival the likes of Tata Nexon EV, Hyundai Kona and MG ZS EV among others.

Mahindra and Mahindra has once again teased its upcoming XUV400 electric vehicle (EV) ahead of its official launch on World EV Day on September 8. This will be the first of the six electric SUVs to be launched by the carmaker in India in coming year. Five of the upcoming models were showcased recently at its UK facility. The XUV400, which will rival the likes of Tata Nexon EV among others, was first showcased at the Auto Expo held in Greater Noida back in 2020, will come with revised exterior design. The teaser video shared by the carmaker showcases how the electric SUV will look like ahead of the official debut.

The short video shared by Mahindra and Mahindra on Monday shows how the grille of the eXUV300 has been modified to look slimmer on the XUV400. Being an electric car, the grille is closed and bears the Mahindra twin peak logo along with ‘X’ patterns dotting the covered space. On either side, it will come with a set of LED headlights which are also redesigned.

The profile of the XUV400 will easily remind one of its standard version. Donning a bright blue colour, the XUV400 shown in the teaser video has chrome side skirts, bulging wheel arches and body-coloured door handles and black ORVMs with integrated turn indicators.

The XUV400 is more than likely to be bigger in terms of at least its length compared to its standard version. Speculation is that this would help it pack a larger boot than the one inside the XUV300.

According to reports, the XUV400 will come equipped with two set of battery packs. While specific details have not been revealed, it is expected that the larger of the two batteries would help this EV have a per-charge range in excess of 400 kms. Tata Nexon EV Max, which is expected to be its arch rival in the sub-compact EV space, has a maximum claimed range of 437 kms on a single charge. 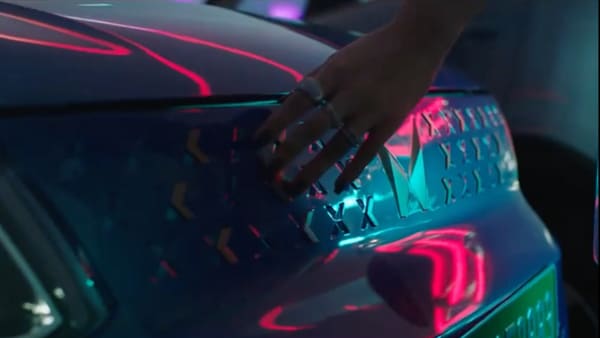 The front face of the XUV400 is different from the eXUV300 model showcased by Mahindra during Auto Expo 2020. The grille is now slimmer, has the new Mahindra logo and X patterns all over it.

The XUV400 EV is also likely to be packed to the brim with features. Expect many features already inside the XUV300 to make its way inside XUV400, and more. Mahindra has not revealed much about the interior of the XUV400. However, according to reports, the electric SUV will come with a larger touchscreen infotainment system than the XUV300, ADAS features among others.

As far as pricing is concerned, currently Tata Motors offers the most affordable electric cars in India. It will be interesting to see how Mahindra decides to price the XUV400 as it aims to challenge the dominance of Tata Motors in the electric vehicles segment in India.