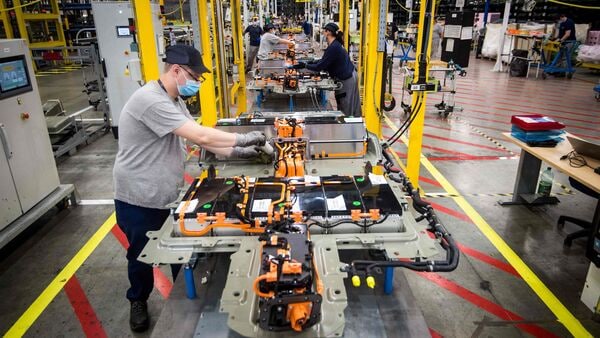 An employee wearing a protective face mask assembles a battery pack for electric cars at the assembly line at the PSA Peugeot Citroen plant in Trnava, Slovakia.

The lithium-ion battery market is expected to exceed 6,000 GWh or 6 TWh by 2030, owing to the rising demand for electric vehicles across the world, forecasts a report by Benchmark Mineral Intelligence. The forecast is based on the current plans announced by various battery manufacturers. The report also points out that as the demand for electric vehicles is rising, consumption of lithium-ion batteries too will increase substantially. This will eventually accelerate the growth of both segments.

The report also claimed that the global lithium-ion battery market reached around 1 TWh at the end of 2021, owing to the substantial rise in electric vehicle sales around the world. The global passenger electric vehicles including BEVs, PHEVs, and HEVs, the battery market more than doubled to close to 286 GWh, as revealed by an Adamas Intelligence report.

The report also points out that at 6 TWh lithium-ion battery capacity, the world could produce around 109 million electric vehicles. However, this projection is based on all the plants coming into operation and operating at their full capacity.

Speaking about the projection, Simon Moores, CEO of Benchmark Mineral Intelligence, said that in reality, it is likely that around 70 per cent of the Gigafactories in the pipeline will come into production with average global capacity utilisation of 70 per cent.

The Benchmark Mineral Intelligence also notes that the lithium-ion battery market is not only going to accelerate but would become more localized, as manufacturers are intending to lower costs and reduce the risk of trade disruption. This would help in making electric vehicles more affordable for the buyers. Currently, battery price contributes more than 40 per cent of an electric vehicle's sticker price. With more affordable battery costs, production costs for the EV makers would come down, resulting in cheaper electric vehicles.