Lithium prices surged by nearly 500% in a year, posing threat to EV growth 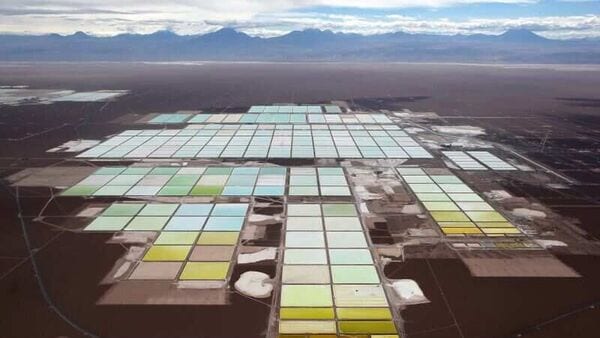 An aerial view shows the brine pools and processing areas of the Soquimich (SQM) lithium mine on the Atacama salt flat in the Atacama desert of northern Chile,

Lithium price has increased by around 500 per cent in just one year, claims a Bloomberg report. With this massive surge in lithium price, the growth of electric vehicles is facing a threat, eventually threatening the clean air movement. This comes at a time when other components used in battery production, such as nickel, graphite and cobalt too have been impacted due to the war between Russia and Ukraine.

Lithium price per tonne in 2012 was $4,450, which has increased to $78,032 in 2022. This clearly shows how the price of lithium has surged massively. The report also claims that demand for lithium has surged exponentially, which can be traced to a slump in 2018-2020, which cut the rare earth mineral's value by nearly 50 per cent and resulted in underinvestment in new supply sources exactly at the time when demand for electric vehicles was exploding.

This price surge and scarcity of raw material could result in EVs becoming more expensive by adding around $1,000 to the price of the new models. This would pause the price reduction of EVs, eventually impacting sales by dampening consumer sentiments toward electric vehicles.

Experts suggest that there is plenty of lithium in the ground, but the time investment is the issue. The report also indicates that the government may intervene further to protect supplies of lithium and a large number of automakers would try to get involved in the lithium mining process directly, something Tesla CEO Elon Musk hinted earlier this year.

This surge in lithium price and scarcity of other crucial raw materials could also lead to the development of new battery technology. Sodium-ion is considered a cheaper and more available alternative raw material compared to lithium.