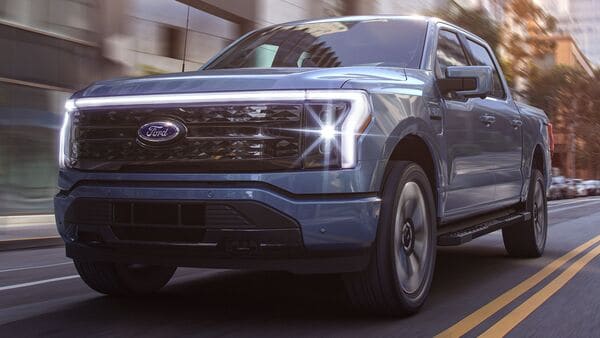 Ford Motor has turned its best-selling vehicle into a fully electric model with the F-150 Lightning.

Ford has announced that it will import more affordable lithium-iron or LFP batteries from CATL to make electric pickup trucks and SUVs more affordable for consumers. This strategy comes as a part of the US auto giant's plan to catch Tesla, the leading brand in the global EV market. Ford is also aiming to secure battery and battery materials into the next decade by signing a wide array of deals with the battery makers, reports Reuters.

(Also Read: GMC Hummer EV has been chosen by US Army for demo and testing)

Lithium-iron or LFP batteries have been gaining more momentum over the conventional lithium-ion or li-ion batteries that are heavily used in electric vehicles. LFP batteries are claimed to offer more energy density, better range, better performance and economically more viable.

Ford Vice President Lisa Drake reportedly said that the automaker plans to secure lithium-iron or LFP batteries from a new 40 GWh factory in North America starting in 2026. However, Drake didn't say if that factory would be built by CATL. "I wouldn't say that we have 100% confidence that all of these can be localized...It's hard work," she added.

Ford believes that using LFP batteries can result in a 10-15 per cent cost reduction, which will help it to offer EVs at a more affordable price. Tesla is currently offering LFP batteries in some lower-priced Model 3 sedans in the United States. Electric truck and van maker Rivian also has said it intends to use LFP batteries.

Ford claims that it is aiming for eight per cent pretax profit margins on its EVs by 2026. The company has claimed that its EV business currently is not profitable. Even an eight per cent margin would be short of the 14.6 per cent operating margin Tesla reported for the second quarter.

Ford is also aiming to expand its annual EV production rate to 600,000 vehicles globally by late 2023 and more than two million by the end of 2026. It expects the EVs to grow at a CAGR of 90 per cent through 2026, more than doubling the forecast industry growth rate.