Ford Mustang Mach-E is claimed to have a potential safety defect that can result in sudden propulsion power loss for the vehicle.
By : HT Auto Desk
| Updated on: 15 Jun 2022, 04:54 PM 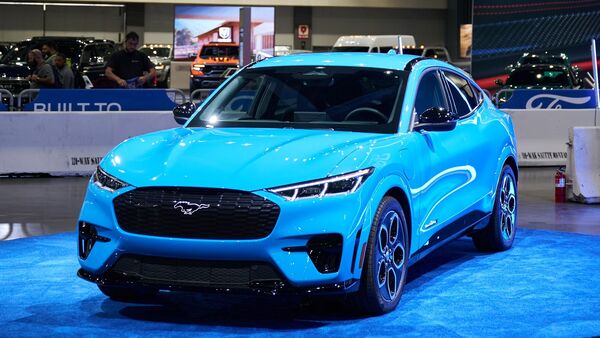 Ford Mustang Mach-E electric crossover is claimed to have taken inspiration from the iconic muscle car.

Ford has instructed its dealers to temporarily stop sales of its Mustang Mach-E electric crossover, owing to a potential safety defect that could cause the vehicle to stall abruptly. The automaker also revealed that this safety issue can result in a malfunction that could cause the vehicle's engine not to start or suddenly lose propulsion power while in motion, which could lead to a dangerous situation on a busy road, reports CNBC.

The automaker reportedly sent a notice to its dealers on Monday asking them to stop selling the EV temporarily. The report also claims that these affected Mach-E crossovers were built between 27th May 2020 and 24th May 2022. The automaker is expected to recall nearly 49,000 of the roughly 100,000 Mach-E crossovers produced during the said time duration. Also, the report claims that these affected Ford Mach-E electric crossovers were built at the automaker's Cuautitlan plant in Mexico.

The report points out that the safety defect involves a potential overheating of Mach-E's high-voltage battery main contractors, which is an electrically controlled switch for the power circuit.

This is not the first time Ford Mach-E EV has reported a glitch. Previously, the US auto giant has issued several recalls regarding the EV since its introduction. The problems ranged from software errors causing unintended acceleration to loose subframe bolts and inadequate bonding for several vehicles' glass panel roofs. Those recalls resulted in high warranty costs for the automaker.

Ford has laid out its EV expansion plan, under which it aims to produce two million electric vehicles every year by 2026. The Mach-E comes as one of the key models of that strategy.