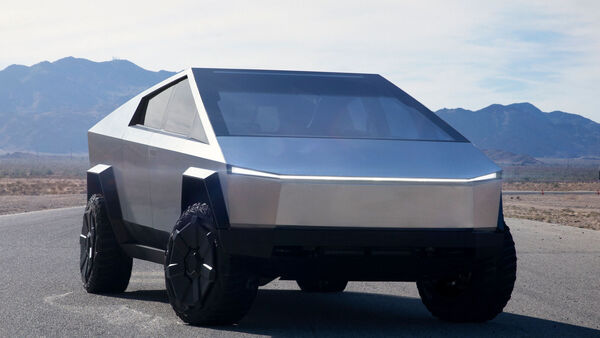 Tesla CEO Elon Musk's tweet comes at a time when the automaker is receiving flak for delaying Cybertruck production.

Tesla CEO Elon Musk on Twitter has said that he has been driving a prototype o Cybertrick electric pickup truck around the auto company's Giga Texas plant. Musk also said that he found the Tesla Cybertruck awesome.

Elon Musk's tweet comes at a time when the electric vehicle major is receiving flak for delaying the production and launch of Tesla Cybertruck time and again. The Tesla Cybertruck was initially scheduled to enter production in 2021. However, the automaker postponed the production till 2022. Just a few days ago news surfaced that the EV major has further delayed production of its most awaited electric pickup truck till 2023.

Tesla Cybertruck is one of the most awaited electric vehicles since the automaker revealed this EV a few years ago. Since then the prototypes of the Cybertruck have been spotted multiple times. However, Tesla remained bullish about the launch of the EV.

Just a few days ago a fresh set of images emerged online showing some subtle yet significant design changes for the electric pickup truck. The latest images showed that Tesla Cybertruck has received wing mirrors unlike the first concept revealed by the automaker. Also, the doors come ditching the handles.

The electric pickup trucks have been finding more headlines around the world lately with several auto manufacturers such as General Motors, Ford, Rivian, Nissan, Toyota focusing on these EVs. Tesla Cybertruck will compete with rivals such as GMC Hummer EV, Ford F-150 Lightning upon launch.

Speaking about Tesla Cybertruck, it comes with an eye-catching design that is very unconventional and futuristic. It gets a two-cab cabin and a large deck area that is covered. The EV will come with a dual-motor variant and a four-motor variant as well.