China has been offering subsidies on purchase of EVs which makes these models more affordable. But these set of subsidies will expire later this year.
By : HT Auto Desk
| Updated on: 07 Jul 2022, 09:11 AM 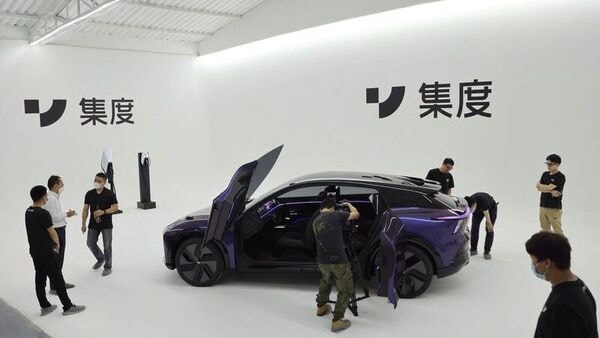 File photo: A member of the media films ROBO-01, a concept car by Baidu electric vehicle (EV) arm Jidu Auto, which is displayed during a media preview before its debut, in Beijing.

China is looking at bolstering rather timid sales numbers in the country's automotive market by extending the tax exemption offered on certain electric vehicles (EVs). Car sales in the world's largest automotive market has been lukewarm in comparative terms in recent months but sales of EVs have continued to grow with foreign as well as local players expanding the number of models offered.

According to a Reuters report quoting the country's commerce ministry, the plan is for the tax exemption on certain EVs to be extended for it to be a continued incentive for people at large to adopt battery-powered mobility. In order to further add impetus to demand, there is a plan to also incentivize trade-ins under which a customer can avail a certain set of benefits if he or she disposes an old vehicle to buy a new one.

China has been offering subsidies on purchase of EVs which makes these models more affordable. But these set of subsidies will expire later this year. While such measures do often mean that the government loses out on a stream of revenue - or at least a part of it, it has helped more and more Chinese locals go the electric way.

But recent times have also seen the Chinese economy slow down with Covid-19-induced lockdowns prompting consumption to fall. Car sales fell by over 12 per cent in May but have recovered in June. Similarly, car production levels also increased in June after a few months of decline. Central and local governments have been mulling various measures to boost demand for vehicles with one proposal even suggesting a tax cut of up to 10 per cent on the purchase of a new vehicle regardless of powertrain. There is also a move to incentivize purchase of second-hand units which could, potentially, get owners to sell their existing vehicles and buy new ones.