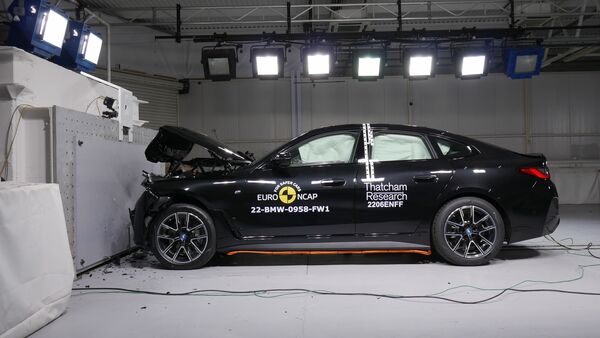 BMW i4 electric sedan, which was launched in India recently, has received four-star safety rating at the Euro NCAP crash test.

BMW i4 electric sedan has scored four-star rating at the crash tests recently conducted by Euro NCAP. Based on the automaker's CLAR architecture, the BMW i4 is the modified all-electric iteration of the 4-Series Gran Coupe. However, it is ironic that the 4 Series Coupe had received five-star safety rating at the Euro NCAP last year. The BMW i4 was crash-tested in both rear- and all-wheel drive specifications, namely the eDrive40 and M50 models. BMW i4 electric sedan, which offers a range of nearly 600 kms on a single charge, was launched in India earlier in May at a price of ₹69.90 lakh.

The BMW i4 electric sedan was tested by the Euro NCAP on four parameters which include safety of adult and child occupants, pedestrians or cyclists and safety assists. While the i4 scored 87 percent for occupant’s safety, it fared only 64 percent on safety assists.

The BMW i4 was crash-tested for frontal impact at 50 kmph while the side mobile barrier crash test had the i4 travelling at 60 kmph. The side pole test pushed the electric sedan at 32 kmph.

According to Euro NCAP, The i4 shows "that luxury is not always synonymous with better security," said the testers, commenting on the result, which was disappointing for a premium brand. "Equipped with similar sensor technology as the 3 Series tested in 2019, the Gran sedan missed some critical points in crash avoidance and achieved a 4-star rating."

BMW i4 is offered with as many as eight airbags, ABS, Dynamic Stability control with CBC, ASC, tyre-pressure monitoring system, crash sensors among others as safety features.