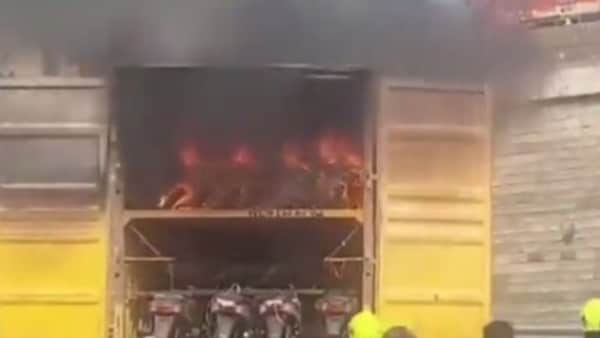 20 out of 40 electric scooters were burnt. (Image: twitter/Immanuel S)

A container truck carrying electric scooters caught fire on Mumbai-Agra national highway in Nashik recently, resulting in half of the electric vehicles blazed to ash, reports PTI. The report also says that despite the devastating fire, no one was injured due to the incident.

The fire incident reportedly took place at around 4:15 pm near a hotel in Pathardi Phata. The report metions that the fire was doused in an hour by personnel from CIDCO and Ambad MIDC fire stations. However, 20 of the total 40 electric scooters that were being transported by the container truck were gutted due to the fire. The exact cause of the blaze is still a matter of investigation.

While the internal combustion engine vehicles are more prone to fire risks, electric vehicle fire can be devastating because of the lithium-ion batteries onboard these vehicles. Once an electric vehicle catches fire, dousing it becomes difficult. Throwing water on a lithium-ion battery that is on fire might make it difficult to extinguish the flames. This is because water reduces lithium in the electrolyte leading to the release of hydrogen gas, which is highly flammable. Hence, throwing water at an EV fire increases the intensity of the flame.