Home Auto Cars News Watch: This Minivan Driver Gets A Hard Lesson For Stopping At Centre Of Road

Watch: This minivan driver gets a hard lesson for stopping at centre of road

The video shows a black minivan in Hong Kong involved in a road rage.The incident involved a truck full of mud and two taxis as well.
By : HT Auto Desk
| Updated on: 01 Aug 2021, 17:59 PM 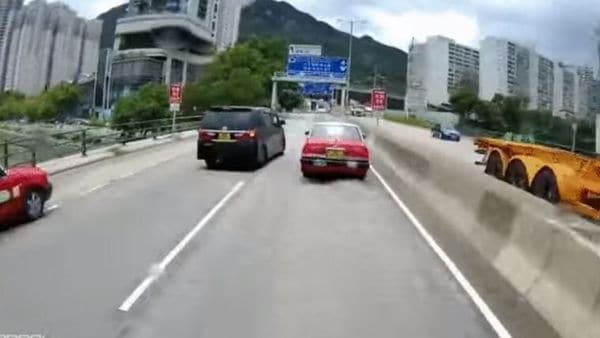 Footage from the truck showed how the minivan tried to block the taxi from passing. (Image: Youtube/Cam)

Driving might be fun, but it also demands attention and some common sense for sure. A Hong Kong minivan driver learnt it the hard way after a messy accident.

A video surfaced on Youtube showing the dashcam footage from a truck. It shows a black minivan stopped at the centre of a highway with one taxi right behind it and another one to the left of them. The taxi right behind the minivan tried to overtake it by pulling out and changing into the right lane. However, the black minivan was not in the mood to let the taxi pass and tried to cut it off.

While it was appearing to be a petty issue of road rage things became messy soon. The truck with the dashcam was carrying gallons of mud. The truck was fast approaching the two-vehicle ahead of it. As both the minivan and the taxi was blocking the entire road, the truck had to slam the brake hard.

While cleaning the mud from the two taxis won't be a tough task, it would be a completely different case for the black minivan. No wonder, the impact poured mud into its cabin and removing it along with the shattered glass is not going to be easy at all.

We see road rages around us more often when bikers or other motorists are involved in such cases. But, this video should be a learner for such people. As it is said, karma pays of